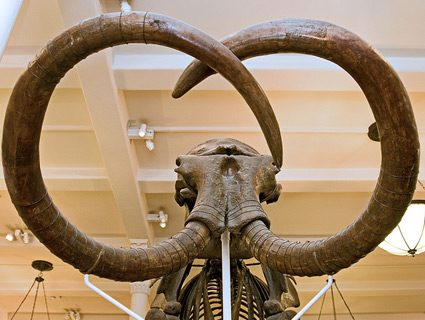 Try figuring out if this is an excerpt from an AFP story that ran on Saturday, or the synopsis for a certain 1993-Steven-Spielberg-popcorn-movie-turned-amusement-park-ride:

Scientists from Japan and Russia believe it may be possible to clone a mammoth after finding well-preserved bone marrow in a thigh bone recovered from permafrost soil in Siberia, a report said…

Teams from the Sakha Republic’s mammoth museum and Japan’s Kinki University will launch fully-fledged joint research next year aiming to recreate the giant mammal, Japan’s Kyodo News reported from Yakutsk, Russia…[T]he discovery in August of the well-preserved thigh bone in Siberia has increased the chances of a successful cloning. Global warming has thawed ground in eastern Russia that is usually almost permanently frozen, leading to the discoveries of a number of frozen mammoths…

Now, I think I’ve seen this movie before…and I distinctly recall Jeff Goldblum getting brutalized by a large dinosaur.

But in all seriousness (since the Jurassic Park angle has already been done to death on this story) the report is just the latest in the teams’ efforts to bring the animal back from extinction—a phase that the species of tusked mammal have dabbled in for about 100 centuries.

The clone-a-furry-prehistoric-creature formula, according to researchers, is as follows:

That’s the same method that Dr. Teruhiko Wakayama used in 2008 to clone a mouse from the cells of another mouse that had been preserved in deep-freeze for over 15 years. The discovery in August of a mammoth thigh bone in Siberia gives the Japanese and Russian scientists hope that they can achieve their goal within the next five years.

The involved researchers and academics are no doubt gearing up for the inevitable PR maneuvers. Not only will criticism pour in targeting the cost-to-practicality of the project (a similar project to clone mammoths at Penn State involved machines costing half-a-million bucks a pop); scientists will also face questions regarding the slippery-slope/playing God factor.

And it doesn’t help that the only things most of us know about the complexities of cloning come directly from what we’ve seen in action movies. And Hollywood does harbor a strong anti-cloning bias, especially when it comes to: