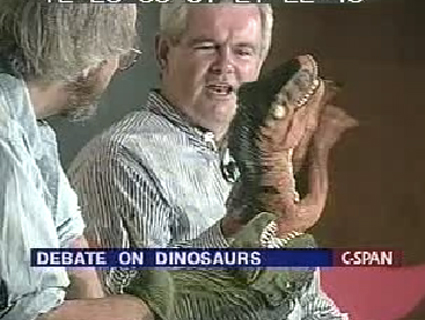 Newt Gingrich and paleontologist Jack Horner debate dinosaurs in 1998.<a href="http://www.c-spanvideo.org/program/111009-1">Courtesy of C-Span</a>

Gingrich fantasized about bringing dinosaurs back to life in his 1995 book, and he decorated his Capitol office with a tyrannosaurus rex skull on loan from the Smithsonian Museum of Natural History. So it shouldn’t come as too much of a surprise that, in 1997 and again in 1998, Gingrich participated in a series of public debates with Montana State University paleontologist Jack Horner to discuss whether the T-Rex was a scavenger or a predator.

The first forum (which was not in the style of the Lincoln–Douglas debates) came shortly after Gingrich, joined at one point by Easy Rider star Peter Fonda, spent a day digging for dinosaur bones—and small mammals—at a secure private site south of Livingston, Montana. Jerry Gray of the New York Times set the scene:

Looking like a pudgy Indiana Jones in jeans, plaid shirt and wide-brimmed hat, lugging a backpack bulging with pickax, chisels and a wisk broom, the Speaker of the House chipped away a crust of brittle stones and dried mud to expose his Jurassic treasure. He grinned broadly and proclaimed, ”I feel like a 9-year-old.”

Following the excavation, Gingrich joined Horner for a one-hour debate at Bozeman’s Museum of the Rockies, to discuss the feeding habits of the T-Rex. Gingrich’s theory was simple: “I believe he was a predator because I saw ‘Jurassic Park’ and he ate a lawyer and it wasn’t a dead lawyer.”

The event, which doubled as a fundraiser for the museum, was enough of a success that they did it again the next year. Yes, there’s a video.