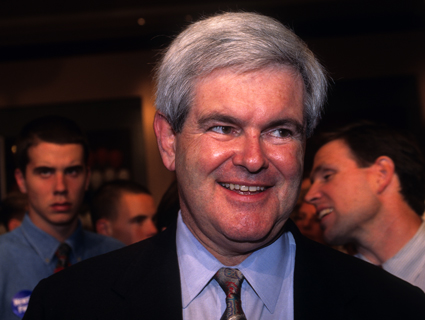 Newt Gingrich created a minor international incident in July of 1995 when, in an appearance on CBS’ Face the Nation, he declared that the United States should recognize Taiwanese independence and seek to “undermine” the stability of the Chinese government. Secretary of State Warren Christopher and GOP foreign policy yoda Henry Kissinger told him to step back. So did China.

What was Gingrich thinking? He told the New York Times shortly thereafter that he didn’t actually believe the US should recognize Taiwan; he was simply acting out a scene from a novel he had read:

[There] he had been, enduring questions about China policy under the bright lights of “Face the Nation.” He had to say something, and the fictional President in Allen Drury’s classic novel about power in 1950’s Washington flashed into his mind.

“It came out of a scene in ‘Advise and Consent,’ toward the end of the novel, where the Russians are bullying the new American President,” Mr. Gingrich said in an interview. “And he says, ‘Here are the three things I can do.’ And he goes through three things, all of them so outside the Russian planning that they were aghast. They said, ‘You can’t do this.’ And he said, ‘Watch me.’

“On reflection, Mr. Gingrich said, “I don’t particularly care about having said the thing about Taiwan either way.”

When the Times asked Gingrich if he’d consider traveling to China to smooth things over, he was blunt: “I don’t do foreign policy.”