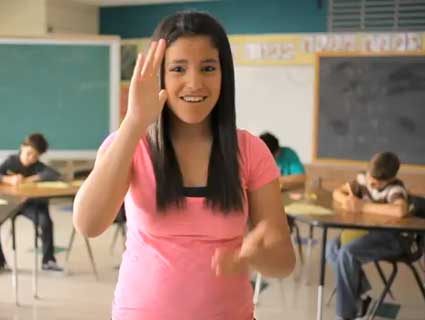 Most mainstream videos feel like little more than an opportunity to watch half-naked women drink champagne atop expensive cars. Gone are the days of “Thriller” and “Take on Me.” Instead, MTV has a show called “I Just Want My Pants Back.”

But while MTV’s busy remaking Teen Wolf (seriously!), hard-of-hearing performers are hard at work producing and publishing videos of their favorite songs. You can now find dozens of videos online reshot and translated into American Sign Language. The Deaf Performing Artists Network (D-Pan), an organization that promotes and produces entertainment for the deaf or hard of hearing, has made some higher-quality examples, but most of the videos out there are labors of love by fans who sign to their favorite songs.

White Stripes, “We’re Going to Be Friends”: Similar to a great cover song or drag show, the best ASL videos don’t just translate lyrics, they reinterpret the energy, style, and even the meaning for audiences. Produced by D-PAN, this video substitutes Jack and Meg White lounging on a couch for a playground full of children. Cute, wholesome, and still indie somehow.

Marilyn Manson, “This Is the New Shit”: This compelling performance is made even better by the performer Bjorn Storm’s disclaimer that while Marilyn Manson’s music deals with “sensitive” issues he believes in “full inclusion of the diversity that occurs within our music.” There are fewer fishnets and high heels as the original Manson clip, but the same badass spirit. Maybe even more badass for being so DIY. He’s doing something right, the video has nearly a half-million views on YouTube.

Nirvana, “Sliver”: ASL videos usually don’t replicate the polish or production values of corporate music videos, but that almost makes them better—nobody loved “Walk this Way” for for its production values. Plus it’s fun to picture these guys explaining their video project to grandma.

Kanye West, “Good Morning”: Good choice for a message about deaf eduction. If only we could get the cartoon bear in Kanye’s video signing.

Paula Abdul, “Opposites Attract”: For those of you who refuse to acknowledge videos made after the ’80s, don’t worry. For better or worse, ASL performers are digging into the crates.

Know some good ones I’ve missed? Put ’em in the comments.