President Barack Obama used his authority to appoint former Ohio attorney general Richard Cordray to head the Consumer Financial Protection Bureau Wednesday without approval from the Senate, which was in recess. By doing so, Obama defied Senate Republicans who had sought to block any and all such recess appointments by holding “pro-forma” sessions for the sole purpose of obstructing the president’s ability to fill executive branch and judicial vacancies.

Obama’s decision to appoint Cordray to the CFBP anyway has provoked outrage from Senate Minority Leader Mitch McConnell, who didn’t complain much when President George W. Bush used recess appointments to install Senate rejects including Iraq war architect John Bolton as US Ambassador to the UN. Wednesday, McConnell characterized Obama’s move as a power grab that “fundamentally endangers the Congress’s role in providing a check on the excesses of the executive branch.”

Obama’s decision to disregard the Senate’s procedural roadblocks sets something of a new legal precedent future Republican presidents may try to take advantage of—presidents typically have not made recess appointments during pro-forma sessions. On the other hand, as TPM’s Brian Beutler writes, Republicans were engaging in an “extra-legal attempt to nullify a key portion of an act of law” by blocking Cordray’s nomination to head the agency. 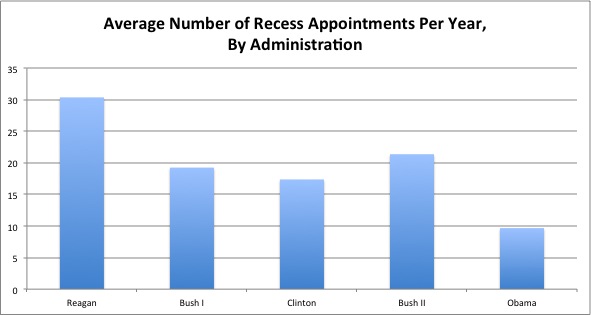