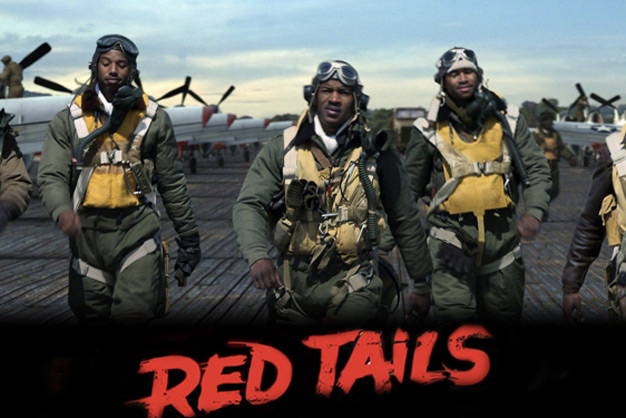 If you’ve heard anything about the movie Red Tails in the past few weeks, it likely had something to do with George Lucas venting about systemic racism in Hollywood.

In the month leading up to the film’s release, Lucas (who served as executive producer) took his high-profile publicity stops as an opportunity to call out the big-studio aversion to predominantly black casts.

“This has been held up for release since 1942, since it was shot,” Lucas joked on an episode of The Daily Show with Jon Stewart on January 9. Then, he started talking bluntly—and sounding more than a little bitter: “It’s because it’s an all-black movie. There’s no major white roles in it at all…I showed it to all of them and they said, ‘Noooo. We don’t know how to market a move like this.'”

The “all-black movie” is based on the true story of the Tuskegee Airmen, the WWII pilots who were the first black servicemen to fly combat missions for the US Army Air Forces at a time when the military was racially segregated and black Americans were not recognized as full citizens at home.

Here’s a rough outline of Red Tails‘ two-hour running time: Brave black pilots are stationed in Italy in 1944. They battle the institutionalized racism in the army and swiftly debunk decades of bigotry masquerading as science. The Airmen massacre the living snot out of scores of mean-spirited, smug Nazis. They triumph over their own fears and personal flaws, and even win the hearts and minds of some white dudes along the way. And (spoiler alert) in the end, racism loses, the fascists get owned, and the Tuskegee Airmen (or “Red Tails”) end up as decorated heroes.

It’s a great story, and it certainly doesn’t hurt that it was inspired by actual events.

But the film, released in at the frigid movie-dump weeks of January, lives up to neither the compelling history nor the premise. In fact, the movie is devoid of visceral thrill, drained of emotional energy, and head-scratchingly awful throughout.

Red Tails starts and ends like a bargain bin of lousy movie parts. It combines the paper-thin human drama of Annapolis, the failed storytelling of Men of Honor, the bland CGI action of Flyboys, the acting and line delivery of Troll 2, and the bewilderingly trite dialogue of Pearl Harbor.

“How you like that, Mr. Hitler,” exclaims one of the Tuskegee Airmen as he singlehandedly blows up a German naval ship. “Watch out Hitler! Here we come,” another pilot blurts out, as more fun carnage ensues. The dialogue is compounded by the fact that every character—even the heroic all-black fighter unit—is essentially a caricature of the era. The most groan-inducing example comes in the form of the main antagonist, an Aryan pilot who the Red Tails nickname “Pretty Boy.” When the Nazi flier intones one-liners like “Die, you foolish African!” the German fighters start to seem frighteningly reminiscent of those buzz-killing robots from Lucas’s own Revenge of the Sith.

And it’s quite stunning that—given all the memoirs, deep research, and still living Tuskegee Airmen out there—the African-American characters are interchangeable, as well as seemingly inconsequential in their own story. The ensemble cast (featuring desultory, sleep-walking performances from the usually worthwhile Elijah Kelley, Tristan Wilds, Cuba Gooding, Jr., and Terrence Howard) is strapped by roles bled dry of convincing passion and motivation, almost to the point of callousness. When a central character crashes and burns following prolonged combat, the incident is afforded little more than a tepid “Shit!” When a captured pilot miraculously escapes from a stalag and returns to base, his comrades seem unmoved. And when the Tuskegee team leader is revealed to be an alcoholic (something that has been known to interfere with both team-leadership skills and airborne Nazi-killing proficiency), the issue is barely grazed upon.

The film doesn’t even double as a serviceable popcorn movie. Director Anthony Hemingway (a veteran TV auteur who’s worked on Treme, True Blood, The Wire, and the spectacular zombie-Halloween episode of Community) crafts the dogfight sequences with all the style and vitality of a cut scene from Nintendo’s Star Fox.

Throw in a mawkish subplot about an Italian love interest and a score that sounds like a cross between dubstep and the monotone intro to Faces of Death, and you have one of the most appallingly bad war movies of recent memory.

Predictably, a media narrative is forming about how Lucas is “testing box office racism” with the release of this movie. Sure, there’s much to criticize regarding the surreptitious and profit-motivated racism of the American film industry. But in the case of Red Tails, the only bias Lucas and co. are challenging is the one leveled against vapid filmmaking.