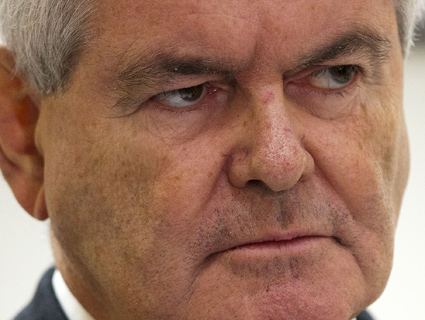 Newt Gingrich has finally reached his destiny: destroyer of the GOP.

In a bitter and spiteful concession speech last night in Iowa—Kanye West could do no worse—the former House speaker, who finished fourth, signaled a shift in his mission. He would no longer be running to obtain the Republican presidential nomination; he would be campaigning to obliterate Mitt Romney. He would be Sherman; the former Massachusetts governor would be Georgia.

If Gingrich does pursue this march—and there are two debates this weekend in New Hampshire in which Gingrich can be a suicide bomber—Gingrich will be reaching the peak of his 30-year career as a Republican demolition man. And now his target will be the candidate the GOP establishment believes possesses the best chance of unseating President Barack Obama.

Gingrich, as is widely known, entered the House in the late ’70s, throwing bombs. He aimed them at both the stodgy leadership of the Republican House minority and at Democratic leaders, whom he routinely called “corrupt.” For years, he hurled harsh and bombastic rhetoric, routinely comparing those with whom he disagreed to either Nazis or Nazi appeasers. It was often hard to keep track of his faux historical analogies. (For a partial list of his excesses, see this run-down.)

During his venom-laced rush to the top, Gingrich sought to institutionalize his hate politics. His political action committee, GOPAC, sent out a memo to Republican candidates counseling them to use particular words when describing Democrats, such as “decay,” “betray,” “traitors,” “pathetic,” and “corrupt.”

And “destroy.” Which was Gingrich’s intent—targeted first at his foes, but then, ultimately, at himself. Soon after achieving his ambition of becoming House speaker, he self-destructed. His ambition, arrogance, and lack of discipline triggered a mutiny among his fellow Republicans. He survived that episode, but after leading the impeachment crusade against Bill Clinton and suffering at the polls during the 1998 midterm elections, Gingrich (who at the time was extramaritally trysting himself) resigned the speakership—rather than face the wrath of his GOP comrades who had (once again) had enough.

Thirteen years later, it was tough for Newt watchers to feel any sympathy when he whined about the incoming attacks mounted by a Romney-supporting super-PAC. His bleating about negative campaigning was, given this historical perspective, farcical. His claim that Romney was a “liar” carried little heft—after all, Gingrich himself had recently displayed his penchant for prevarication, such as when he claimed he had been paid by Freddie Mac for performing duties as a “historian.”

But a presidential candidate scorned can be a dangerous thing. Gingrich has never had a self-esteem problem. His ego is supersized. And with his late-autumn jump in the polls, he, no doubt, was measuring himself for a crown. (Tiffany’s?) He all but declared his ascendancy was inevitable. Yet then that nasty super-PAC came along and…told the truth about Gingrich, in killer attack ads, behaving much as Gingrich had always counseled GOPers to act. In a 1978 address to College Republicans, before he was elected to the House, Gingrich declared, “I think one of the great problems we have in the Republican Party is that we don’t encourage you to be nasty.” Well, if his goal back then was to nastify the GOP, he can proudly proclaim, “Mission accomplished.”

But having been on the receiving end of Newt-like treatment, Gingrich is not going to quietly skulk back to his Newt Inc. empire and continue to cash in. First, it seems, he must crush Romney. Which is not such a hard task. At the upcoming debates, Gingrich will have plenty of ammo—all those flip-flops and whatnots—to blast Romney to smithereens. If Gingrich goes scorched earth, he can provide much material for Democratic anti-Romney ads and will obviously tick off the Republican Party pooh-bahs who have already decided that Romney is the only credible candidate in this sorry lot.

It will be as if a time bomb with a very long fuse has finally detonated.

The Republicans embraced Gingrich when his thuggish formula for success worked and returned them to power in the House of Representatives. But now that same explosive force can be trained on the GOP inner circle’s favorite. Live by the Newt, perish by the Newt? Romney might be able to withstand the detonation of the Gingrich death star. But if Gingrich does go nuclear on Romney, it will be a fitting—and not unpredictable—end to a long reign of terror.