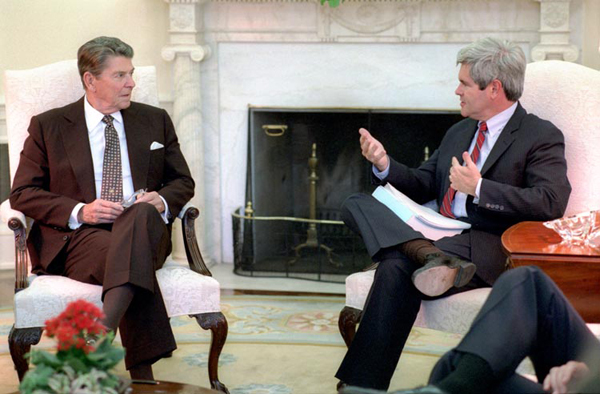 Newt Gingrich and Ronald Reagan in 1985.: Courtesy of the Ronald Reagan LibraryOn Wednesday, Republicans took aim at Newt Gingrich for his past criticisms of Ronald Reagan. The Drudge Report featured 10 anti-Newt stories as of yesterday, none more prominently than Elliot Abrams’ takedown of Gingrich at the National Review. The former speaker, Abrams wrote, “spewed insulting rhetoric” and “was voluble and certain in predicting that Reagan’s policies would fail.”

Set aside, for a minute, the fact that Nancy Reagan considered Newt to be the torch-carrier for her husband’s legacy. The problem with Newt Gingrich’s 1980s criticism of Ronald Reagan is that it presents today’s Republicans with an uncomfortable truth: Gingrich attacked Reagan from the right because there was room to do so. Reagan wasn’t always the tax-cutting arch-conservative Republicans make him out to be. He was often a military hawk but not always. He wasn’t, frankly, the Ronald Reagan that Republicans speak of with so much reverence today.