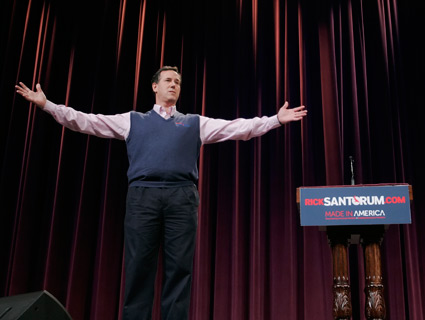 Does Rick Santorum believe President Barack Obama is literally part of a satanic plot to destroy the United States?

This is a serious inquiry.

Santorum, the GOP presidential front-runner (according to the latest national poll), has reached the top of the GOP heap by claiming repeatedly that Obama is destroying the bedrock of American society. At a rally in New Hampshire before the primary there in early January, he declared, “If Barack Obama is reelected, then America as we know it will be gone.” At a recent campaign stop, he proclaimed that Obama is “systematically destroying” families and churches. In a recent fundraising email, Santorum assessed the 2012 stakes as particularly high:

That’s quite a statement. (Think about the election of 1860.) In this email, Santorum maintained that if Obama is not stopped, he will “fundamentally change us from a free market, capitalist system to a Republic in the mold of the faded, decrepit Republics of Western Europe.”

Need another fix of Santorum religiosity? Check out our “Santorum or Heavy Metal?” quiz.

So Obama plans to bring about the ruination of the United States. And so does Satan, according to Santorum.

In a speech at Ave Maria University in Florida in 2008, Santorum asserted that the Evil One is intent on the destruction of the United States. Promoting a variant of the American exceptionalism theory, the former Republican senator told the students:

This is not a political war at all. This is not a cultural war. This is a spiritual war. And the Father of Lies has his sights on what you would think the Father of Lies would have his sights on: a good, decent, powerful, influential country—the United States of America. If you were Satan, who would you attack in this day and age. There is no one else to go after other than the United States, and that has been the case now for almost two hundred years, once America’s preeminence was sown by our great Founding Fathers.

Note Santorum’s use of the phrase “spiritual war.” This was a reference to the fundamentalist Christian notion of spiritual warfare—usually associated with evangelicals, not Catholics—which holds that everything that takes place before us is a reflection of the titanic confrontation between God and the Antichrist. That is, what occurs in the world of the flesh is a manifestation of this ongoing deeper clash. Consequently, as Santorum told the students, the fight over abortion is not a political matter or a cultural conflict. It stems from the face-off between the King of Kings and Beelzebub.

And Lucifer is wily, Santorum said in this speech: “He attacks all of us, and he attacks all of our institutions.” The devil, Santorum asserted, has step-by-step claimed the soul of the most important institutions of American society. He began his attack on the United States, naturally, by seizing control of academia:

He understood pride of smart people. He attacked them at their weakest, that they were, in fact, smarter than everybody else and could come up with something new and different. Pursue new truths, deny the existence of truth, play with it because they’re smart. And so academia, a long time ago, fell.

The college-educated elites, he noted, were “the first to fall” to Satan. Harvard is apparently under the control of the Fallen Angel.

Then Satan claimed Protestant churches: “We look at the shape of mainline Protestantism in this country and it is in shambles; it is gone from the world of Christianity as I see it.” And next, Santorum insisted, came American culture: “I need not even go into the state of the popular culture today. Whether it’s sensuality of vanity of the famous in America, they are peacocks on display, and they have taken their poor behavior and made it fashionable.” Finally, Satan extended his dominion over politics and government: “The body politic held up fairly well up until the last couple of decades, but it is falling too.”

Santorum sees Satan triumphing everywhere in his crusade against the United States, from Princeton eating clubs to Episcopal church pews to the backlots of Hollywood to the hallways of government. He also sees Obama as actively working to tear down the United States. Coincidence or not?

In Santorum’s worldview (and underworld view), Obama appears to share Satan’s design for the United States. That would appear to make Obama, at the very least, an instrument of Satan’s plan, if not a witting participant.

Santorum’s belief in a satanic conspiracy is not a trivial matter. It might well shape how he would govern, should he reach the White House. If a politician views those who oppose his policies and ideas (say on birth control) as tools or partners of Satan (as opposed to simply being wrong), it could well affect how he responds to them and how he considers their argument. The president is supposedly the president of all Americans, even those who didn’t vote for him. But if the political opposition is part of (or moved by) a satanic force, then there’s not much point in granting it any respect—or seeking compromises. After all, all’s fair in spiritual warfare.

In public life, it is often tough to examine the religious views of candidates (though many conservatives have not found it difficult to do that with Obama). But when the theological notions of a politician might fundamentally guide his or her actions and decision making, it ought not be out of bounds to examine those beliefs and especially their intersection with the person’s policy plans.

With his 2008 speech, Santorum has put satanism into play in this already-odd 2012 Republican presidential campaign. As he continues to accuse Obama of purposefully annihilating the foundations of American society, Santorum ought to be pressed on this simple question: Is the devil making him do so?