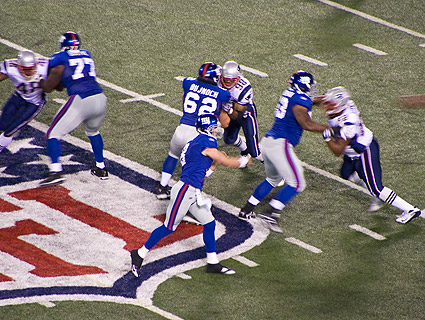 Most Americans won’t need a justification to watch Sunday’s game, but if you’re a TomDispatch.com reader you might think, even in passing, that celebrating the holiest day of violence, consumerism, and class warfare on your couch is a betrayal of your values or a waste of your time. You might even imagine that it would be better to take a hike, read a book, or meditate.

Not this Sunday, buster. It’s an election season. You need to watch this game to fully understand how jobs, religion, leadership, and healthcare dominate every American contest.

1. Joe Hill will be playing: Where else will be you be able to watch more than 100 young men, most of them African-American, working for high wages in a totally unionized shop? True, their jobs are dangerous (more on that later) and relatively short-term (typically three or four years), but they are also high profile. They can lead to TV gigs, even political office. Buffalo Bills quarterback Jack Kemp became a Republican congressman and vice-presidential candidate. The former New England Patriots running back and ESPN analyst Craig James is currently running for the Republican nomination for Senator from Texas, although to less than universal acclaim.

Fans tend to fixate on the money and glamour of the football job, so that when this past season was threatened by labor-management strife, it was easy for National Football League lackeys to frame the confrontation as “millionaires versus billionaires” so the rest of us thousandaires wouldn’t stand with the workers against the bosses.

Even with a progressive attitude, watching the Super Bowl, which seems to float on rivers of oil—think car ads—and beer, is not exactly like holding a OWS-style general assembly in the red zone. Nevertheless, it’s a terrific visual of the American class divide. In their skyboxes, usually in jacket and tie, eating, drinking, and high-fiving—or scowling—are the one-percenters who own the team, which is usually not their only source of income.

Below them, on the field, are their employees (many of them temporary one-percenters, given the median league salary of at least $560,000), using up the capital of their bodies. If you want to root for the Patriots or the Giants, fine. I’ll be rooting for the working class.

2. Tim Tebow will not be playing: Thank God. The season’s most hyped player—the NFL published its first magazine last month with Tebow on the cover—has the looks, personality, and backstory of the clean-living, principled, athletic role model we’ve been told we need to help raise our children. Born in the Philippines to Baptist missionaries who refused to abort him despite his mother’s illness, Tebow led the University of Florida to two national championships and became the first sophomore to win the Heisman Trophy, college football’s top individual prize. He also refused to be considered for Playboy’s annual all-American team because the magazine’s values conflicted with his Christian beliefs.

Tebow was a star attraction of the 2010 Super Bowl—in which he didn’t play. (He was still in college.) He appeared in a commercial for Focus on the Family in which he tackled his mother. The ad generated intense controversy because of the group’s stand against abortion and same sex marriage. Neither issue was explicitly mentioned in the commercial, which marked the first time CBS had broken its rule against ads from advocacy groups.

This past season, as a Denver Bronco rookie quarterback, Tebow carried his team to the division playoffs despite his shortcomings as a passer and field tactician. As the saying goes, all he could do was win. He was tough, determined, inspirational, and a fine runner. Although he was careful to note that God did not care who won, he prayed publicly so incessantly it was celebrated and mocked as Tebowing.

While his aggressive evangelism turned off some people, no one could deny his confidence and fierce competitiveness on the field, and his humility and niceness off it. Also, he was white (as are most fans, coaches, and team executives) in a predominately black sport, a declared virgin in a world where the macho, and sometimes felonious, “playas” get an inordinate amount of attention and criticism. So why was there so much gasbagging about his evangelical faith? Why was he called “polarizing”?

Tebow is too true to be good. His religious principles may eventually even get in the way of money-making. Playing for a higher team, he is a threat to owners who can’t buy him off (although he has plenty of commercial endorsements, thank you—and Republican presidential contenders are lining up).

He may also disrupt the fantasies of fans.

Dan Levy, writing in Bleacherrport.com, put it well: “Because his faith is so prevalent and because his beliefs have become so much of who he is on and off the field, it’s nearly impossible to separate the two. Can you blindly root for Tim Tebow on the football field without, in turn, tacitly rooting for him in life? And does rooting for him in life—even if that simply means rooting for the underdog to succeed—include implicit approval of his beliefs? Are Broncos fans able to parse the player from the man, the quarterback from the evangelist?”

If he were playing Sunday, it undoubtedly wouldn’t be the Super Bowl, but the Tebowl.

3. JoePa will be there: Once held up as the gold standard of college football coaching, now as the hero of a classical tragedy, the late Joe Paterno will be represented on Sunday by three players and his successor as head coach at Penn State. They will be reminders of what Paterno really represented beneath the iconic image.

The three players, almost a thousand pounds worth of them, are Jimmy Kennedy, a 302-pound defensive tackle, and Kareem McKenzie, a 330-pound tackle—both Giants—and Rich Ohrenberger, a 300-pound guard for the Patriots, who is on injured reserve. Boston College with six players in the Super Bowl and Rutgers with five lead this year’s honors list of colleges that serve as NFL minor league feeder teams, but Penn State has been a perennial supplier of meat on the hoof. No wonder the school has been dubbed Linebacker U.

Paterno became head coach in 1966, the year before the first Super Bowl. At least one player he coached has been in every one of the 46 Super Bowls. He produced several hundred pro players. At the start of this past season, there were 36 Nittany Lions on NFL rosters.

In other words, Penn State was a football factory as well as a research university, which made Paterno the Geppetto of those over-sized puppets, even while he was touted as a classics scholar (he identified with Aeneas) and a philanthropist—he donated $4 million to Penn State. (How does a coach get that kind of dough?)

His successor will be Bill O’Brien, the current Patriots offensive coordinator. Though he graduated from Brown, as did Paterno, O’Brien has no connection to the Penn State program, which has angered some people, reassured others. A number of former players have threatened to sever their ties with the university because the school went “outside the family” for a new coach, an act seen as a total repudiation of the Paterno era. Others felt that a rigorous cleansing was necessary. After all, Paterno had apparently known for almost 10 years that Jerry Sandusky, once his main assistant and presumed heir, was an alleged child molester. Paterno tossed the matter upstairs and continued to devote his attention to Aeneas and linebackers, while Sandusky allegedly raped more little boys.

Paterno’s powers of concentration or expedience or denial were extraordinary enough, it seems, to qualify for presidential nomination. In his last interview, he implied that he probably couldn’t fully process the tale he was told about Sandusky sexually assaulting a young boy in the football team’s shower-room because he knew nothing about male-on-male rape.

Frazier, of course, was referring to the lack of leadership—the lack of humanity—at Penn State that allowed fealty to an institution and the power it offers to trump individual responsibility. It was an it-takes-a-village-to-raise-a-child sort of statement. It’s worth keeping in mind as you watch the Super Bowl, because the subject Frazier raised goes far beyond the charges against Sandusky or the lack of leadership Paterno and others exhibited in the case. It includes our neglect, denial, and often encouragement of all the blows to the head that every football player—from peewee to pro—routinely suffers.

Watching those hits, hearing them lauded, feeling them vicariously is the guilty pleasure of football, as marketed by the NFL. Players who can deliver such hits and those who can absorb them, shake them off, and play on are extolled as true warriors, as gladiators, as real men. More and more of those “real men” are now being diagnosed with dementia and other conditions caused by the traumas first suffered by Peewee brains.

The “concussion discussion” started with retired NFL players pleading with the league and the players’ union for financial help with their medical bills. It has since trickled down to college, high school, and youth football as it becomes ever clearer that all those little insults to the brain that begin so early add up to catastrophe in middle age.

So if you believe in taking responsibility for “every other kid,” go organize in your community against helmet-wearing tackle football—at the very least until high-school age. (If you let your own kid play peewee football, you should be charged with child abuse.) It’s hard to go up against Jock Culture, which you’ll be watching in its full power and glory on Sunday. Then again, it’s hard to go up against the banks and the war machine, too. It’s time, in other words, to occupy football.

And if you need a pep talk before you get started, here’s one from Tim Tebow, who marked his eye-black with the numbers of biblical quotations until it was banned by the NCAA last year. (The NFL also bans unapproved logos.) I approve one of Tebow’s — Hebrews 12:1-2. “Let us run with patience the race that is set before us.”

Robert Lipsyte, the Jock Culture correspondent for Tomdispatch, is the author of a recent memoir, An Accidental Sportswriter. Follow TomDispatch on Twitter @TomDispatch and join us on Facebook. To stay on top of important articles like these, sign up to receive the latest updates from TomDispatch.com here.