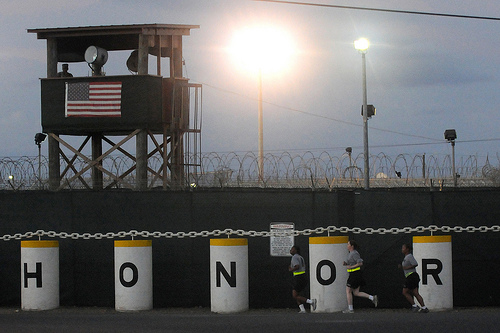 I’m sure this won’t make lefties start feeling warm fuzzies toward Guantanamo Bay, but the Navy is apparently trying to make the Cuban base green. McClatchy reports the effort comes complete with bicycling cops, a 270-foot-tall windmill, and solar-powered floodlights.

There are still 171 prisoners held at Gitmo, along 1,850 members of the military and contractors. The base spends $11.7 million a year on power and water, according to the article, which is among the reasons the Department of Defense is trying to make its energy use more sustainable:

Everything from diesel fuel to spare parts arrives by ship or aircraft, more than tripling the price of power, according to base estimates.

“From my perspective certainly the greening of Gitmo is important,” says U.S. Navy Capt. Kirk Hibbert, the base commander. National security is paramount, he said, but the Navy mandate to curb consumption “has an effect on almost everything we do here.”

Hibbert’s the man who put a pair of Navy cops on bikes to patrol the base rather than sit inside air-conditioned sport utility vehicles, an $800 a year savings that sends a symbolic message. And it’s been on his watch that a contractor is building a huge solar array behind the high school.