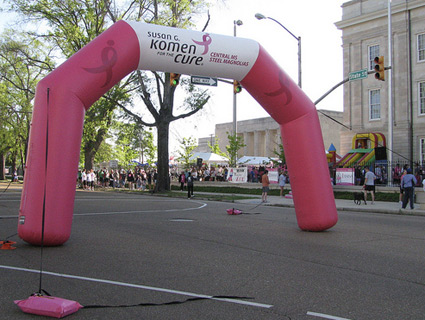 An internal Komen memo written by President Elizabeth Thompson and obtained by Jeffrey Goldberg of The Atlantic states that if “an applicant or its affiliates” is under investigation “for financial or administrative improprieties by local, state or federal authorities,” then “the applicant will be ineligible to receive a grant.” Penn State, the Pennsylvania university that the Hershey center is affiliated with, is currently under investigation by the federal government over the sexual assault scandal involving former assistant coach Jerry Sandusky, who has been indicted on multiple counts of sexual abuse of children. In 2008, the Komen foundation awarded a five-year, $7.5 million grant to the Hershey center to study treatments that could reduce the risk of breast cancer.

Under the Jeanne Clery Disclosure of Campus Security Policy and Campus Crime Statistics Act, university officials are required to “issue a timely warning if a reported crime represents a threat to the campus community.” The Department of Education announced that it was investigating Penn State over possible Clery Act violations last November, and a Penn State spokesperson told Mother Jones that the investigation is ongoing. The Komen foundation has not yet responded to a request for comment.

Komen’s founder, Nancy Brinker, is a former Bush administration official who has given almost $200,000 to Republican officials over the years, and Karen Handel, Komen’s top lobbyist, is a pro-life Republican who was elected secretary of state in Georgia. Komen officials have insisted that Brinker and Handel’s right-leaning politics weren’t a factor in the decision to cut off funding, but Goldberg reported that the new grant standards were written as a pretext for denying funds to Planned Parenthood, and that the decision was “driven” by Handel.

Brinker, appearing on MSNBC Thursday afternoon, denied the decision had anything to do with politics.  “I’m troubled that it’s been labeled as political. This is not a political decision,” Brinker said.