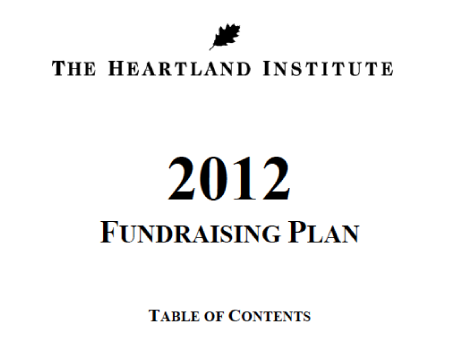 Over at ThinkProgress Green, Josh Israel and Brad Johnson expose 19 major corporations backing the Heartland Institute, the think tank whose internal documents were leaked this week, laying bare its plans to teach students that climate change is a hoax and other anti-climate efforts. As my colleague Kate Sheppard reported on Thursday, the documents—posted here and here—prompted a backlash from Heartland, which deemed at least one of the documents fake and some tampered with. Interestingly, Heartland president Joseph Bast then used the incident to write to donors, first to apologize—the leaked emails identified some private donors, to whom Heartland promises anonymity “because nobody wants the risk of nutty environmentalists or Occupy Wall Street goons harassing them”—and then to ask for more money (“Now more than ever, I need you to stand by us in our time of need”).

Heartland’s fundraising tactics (PDF) seem to have worked well in the past, given the group’s impressive suite of corporate donations in 2010 and 2011. Here’s a selection of the full list* of Heartland’s corporate backers, via ThinkProgress:

Correction: An earlier version of this article stated that the list above was the full list. The sentence has since been fixed.