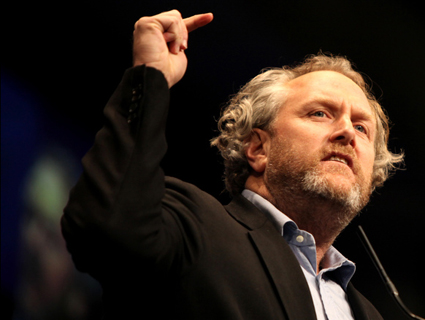 I’m hardly the person to properly eulogize Andrew Breitbart, the right-wing provocateur who died unexpectedly yesterday at the age of 43. My only contact with him was brief, but revealing. Like so many others who found themselves in Breitbart’s crosshairs, my interaction with him was through Twitter, where he hounded me to admit that the media had applied a double standard in its coverage of the tea party and the budding Occupy protest movement I’d been following in Oakland last fall. Insisting I was willfully ignoring the ugly reality of Oakland’s tent camp, Breitbart sneered, “#OccupyOakland has so much promise beyond the violence, threats, misogyny & racism!”

I didn’t take the bait, and our exchange turned into a light-hearted back-and-forth in which he declined my invitation to play soccer in San Francisco. “More of a baseball and football guy!” he tweeted back. “Moving. Fast. Or. Even. Slow. Not. My. Strong. Suit.”

Offsides: Breitbart turns down an invitation to a friendly soccer match.Our brief correspondence angered at least one Occupier, who demanded to know why I had given Breitbart the time of day, or at least hadn’t tried to savage him. Her reaction was indicative of Breitbart’s simple genius, upon which his shock-jock journalism shop successfully, relentlessly trolls its political foes, who then unwittingly play into its hands. My first story on Occupy Oakland touched on this: By taking easy jabs at the left, Breitbart and his co-conspirators elicit hysterical reactions that reinforce whatever perceived hypocrisy they’re assaulting.

Such a tactic isn’t particularly novel, but it was the extent to which Breitbart flaunted boundaries—hijacking former Rep. Anthony Weiner’s resignation press conference, screaming at Occupy CPAC protesters to “stop raping people!” (see video below)—that defied the tediousness of a Hannity or an O’Reilly. His outbursts were so outrageous that he often seemed unhinged. But he acted with purpose, reckless though it could be, and he was surprisingly effective. I wasn’t the only one to suspect that the early reports of his death were another ploy until a coroner’s report confirmed them.

In an excellent 2010 profile, The New Yorker’s Rebecca Mead noted, “No battle is too petty for Breitbart, no target too small or pathetic.” Breitbart’s brand of political theater openly embraced, thrived on, and existed only because of the absurdity of the hyperpartisan vitriol that infects American politics, a fact that seems lost on many of his opponents. He was one part political operative, one part gonzo journalist. “I have two speeds,” he told Slate, “humor and righteous indignation.”

For better or for worse, Breitbart greatly influenced the new media landscape. He was a key player in the Drudge Report’s early good fortunes and later used what he’d learned there to help launch the Huffington Post. Then he built up his eponymous media empire, where he employed equally tenacious, if far less talented, peddlers of agitprop, like leftist-turned-FBI informant Brandon Darby and radio host Dana Loesch (who last month applauded US Marines who urinated on the corpses of their enemies). Breitbart published James O’Keefe’s infamous pimp-costume video that took down ACORN, broke the Twitter sexting scandal that forced Weiner into retirement, and got agriculture secretary Tom Vilsack to prematurely fire then-USDA employee Shirley Sherrod through a vicious campaign accusing her of racism. (That stunt remains the subject of a defamation lawsuit.)

In the best Breitbart obit so far, Jack Shafer wrote, “An F-bomb from Breitbart’s lips was a sort of Irish blessing, an invitation to get in the ring with him to see who was the champ and who was the chump.” Breitbart’s war against the established media order was one of conviction, aided by his utter disregard for the traditional conventions of journalism. His politics were deplorable to anyone on the left, but the critics who understood his game couldn’t help but respect his resolve.

Even in death, Breitbart is at the center of a rhetorical war, his critics’ vitriol and glee playing directly into the narrative he spent his career weaving. Like Christopher Hitchens, whom Breitbart admired, and other rabble-rousers who ignored the custom of never speaking ill of the dead, Breitbart would have had it no other way.