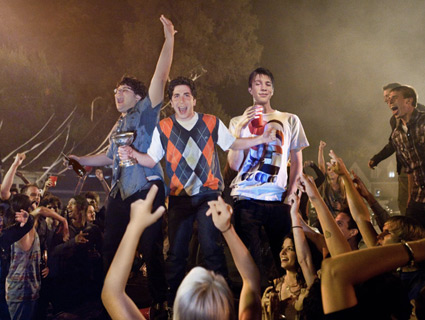 This weekend, you could go see the highly anticipated The Lorax, with all its Truffula tufts and fleecy anti-greed morality.

The new animated movie has a stout, gremlin-type creature talking how bad it is to screw over wildlife for profit. The CGI is truly eye-popping. And there are a whole lot of gyrating bears. So, yes, you should go see The Lorax. You absolutely should do that.

You totally, definitely should.

Or, you could succumb to 90 minutes’ worth of bi-curious girls, rowdy gentlemen, loud music, self-destruction in the suburbs, booze guzzled, pills popped, and cops in riot gear. (In short, all the things that make life worth living.)

The rager quickly descends into a hyper-violent mess that can only be described as a cross between 10-Cent Beer Night and a party thrown by The Who.

The film, produced by director Todd Phillips of The Hangover and Old School fame, is shot in contemporary found-footage/mockumentary mode—think: cinéma vérité, by way of Cloverfield and Parks and Recreation. If you’ve seen Revenge of the Nerds, Risky Business, and Superbad, you’ll recognize the plot: Three high-school outcasts seek to up their social standing and prove to “bitches” that they are “large-scale ballers.” So when one of them gets the family home all to himself on his birthday, the boys invite half of LA to attend their all-night blow-out. After some mass-texting and old-fashioned word of mouth, they wind up with a carouse so epic—two DJs, a “Naked Girls Only” pool, a moonbounce, every harmful substance imaginable—that Kanye West is rumored to be in attendance.

And thus the evening bacchanalia descends into a hyper-violent mess that can only be described as a cross between 10-Cent Beer Night and your average party thrown by The Who.

Downton Abbey, this is not. The mockumentary wallows in a decidedly crass teen fantasy fueled by lust and the simple joys derived from rooting for the underdog. It’s vulgar. It’s sophomorically misogynistic. It sends all the wrong messages to young adults. And moviegoers have seen this all before. Yet you will appreciate the movie for the same reason you still go to laser-tag arenas to challenge small, defenseless children: Because the formula works.

The performances—from a cast comprised entirely of unknowns—feel oddly interchangeable, most likely due to the fact that every character in the film is a stock character. Thomas (played by Thomas Mann) is the gawky, drugged-up birthday boy who’s secretly in love with his long-time friend Kirby (Kirby Bliss Blanton, a prepossessing blonde who follows in the very recent footsteps of Amber Heard and Teresa Palmer). Costa (a sharp and vicious Oliver Cooper) is the proud Jew and awkward man-whore who sets the party in motion. JB (Jonathan Daniel Brown) is a lamebrained, portly facsimile of McLovin. And Alexis (Alexis Knapp) shows up at the party as the ready-and-willing sex object/Queen Bee.

So is this movie 100 percent prepackaged? Is it weighed down by a thoroughly unoriginal mean streak? Of course. But there’s something admirable about how shameless and giddy Project X is at exploiting the irrepressible desire for law-flouting immaturity.

Project X gets a wide release on Friday March 2. Click here for local showtimes and tickets.