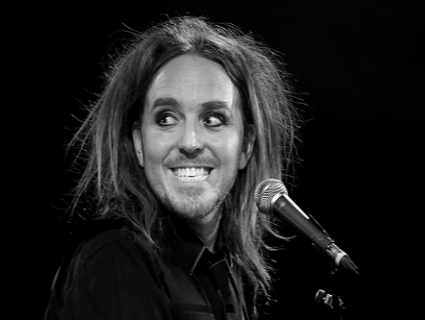 In 2005, Tim Minchin, the Australian-born singer-songwriter comic who’s been called “the gothic love-child of Cole Porter and Lenny Bruce,” performed a song at a breast cancer fundraising event in which he counted the ways in which he appreciates his blow-up doll:

Minchin brings the same combination of sweetness and gall to songs like “If I didn’t have you,” an ode to his wife featuring the chorus “if I didn’t have you, someone else would do.” He has a knack for well-timed comedic pauses and juxtaposition of music with words. In “Lullaby,” a melody about putting a child to sleep, he pairs a gentle nursery tune with the lyrics “I don’t know what else I can do, to try and hush you. My heart says I love you, but my brain’s thinking fuck you.”

Judging by the Top 40, Americans aren’t exactly music snobs. We don’t require our popular lyrics to contain much in the way of deeper meaning, or even make sense. We’ll swallow the same computer-generated beats year-after-year. Minchin is for those misfits who prefer music with a dose of social commentary, who like hearing Minchin slash through such time-honored cultural tropes as love at first sight, the joy of raising babies, and religion with a 55-piece orchestra behind him.

Presumably, these are the people who make up Minchin’s nearly 370,000 Twitter followers (@timminchin) and fill the thousand-seat stadiums he regularly sells out without much media coverage. Apparently, there’s money in cornering the women-who-enjoy-sex-doll jokes demographic and the people-who-hate-their-babies demographic. (Perhaps he’s taking a page from the Louis C.K. playbook.) Now that Minchin’s gaining a stateside following, it probably doesn’t hurt that his penchant for heavy eye make-up and scraggly hair bring out a marked resemblance to Captain Jack Sparrow.

Minchin will be playing six shows in Southern California from April 7th — 10th (two are sold out) and the live DVD of his show, Ready For This, was recently released in the U.S.