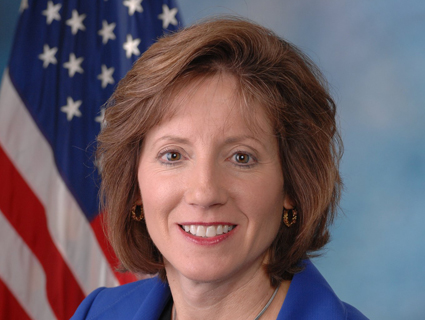 Rep. Vicky Hartzler (R-Mo.) won election to the House in 2010 in part by arguing that the longtime Democratic incumbent she was challenging was insufficiently anti-gay. (Never mind that her opponent, Ike Skelton, was the architect of Don’t Ask, Don’t Tell.) In Congress, she’s distinguished herself mainly by comparing gay marriage to handing out drivers’ licenses to third-graders (she’s against it), and proposing to modify Don’t Ask, Don’t Tell by forcing gay soldiers to live in segregated barracks.

Now we know she’s also a birther. At a townhall in her district on Thursday, Hartzler was asked for her thoughts on the President Obama’s birth certificate, in light of Maricopa County (Ariz.) Sheriff Joe Arpaio’s investigation into the Commander-in-Chief’s citizenship. Hertlzer’s response:

I don’t know, I haven’t seen it. I’m just at the same place you are on that. You read this, you read that. But I don’t understand why he didn’t show that right away. I mean, if someone asked for my birth certificate, I’d get my baby book and hand it out and say ‘Here it is,’ so I don’t know.

I have doubts that it is really his real birth certificate, and I think a lot of Americans do, but they claim it is, so we are just going to go with that.

A little over a year ago, my colleague Adam Serwer unveiled what he called the “birther lexicon,” which split the field of conspiracy theorizing about the president into seven distinct categories, such as “ironic birther” and “post-birther.” I think Hartzler actually falls into an eighth, and previously unidentified category: slacker birther. As in, “someone who has serious concerns that the President worked with the state of Hawaii in a vast conspiracy to fabricate his birth certificate to hide the fact that he was not born in the United States, and is thus constitutionally unqualified to be President—but never took 10 seconds to Google the thing for herself (here’s a quick link) and doesn’t feel like doing anything about it.” Say what you will about Joe Arpaio (really, go ahead) but when he thinks he’s uncovered a massive conspiracy to defraud the public, he takes action.