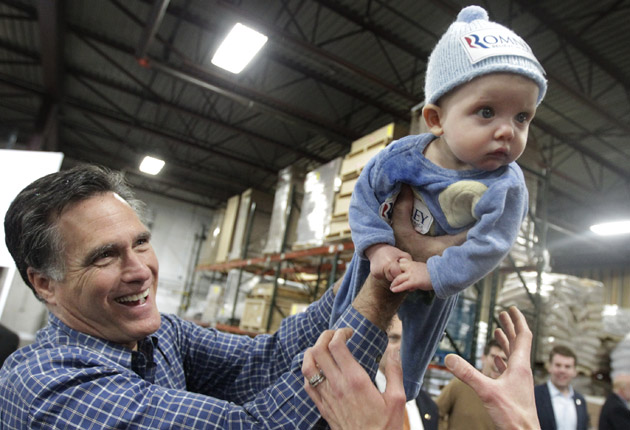 Breastfeeding is having another moment. Thanks to Time magazine’s creepy cover pic of young mom Jamie Lynne Grumet nursing her three-year-old son, the nation has once again gone tits-up over how mothers opt to feed their young. The choice is not an easy one: As previous Mother Jones parents will attest, there’s an enormous emotional and physical cost to breastfeeding. On the other hand, mother’s milk doesn’t contain secret toxic chemicals, put babies at increased risk for diabetes and asthma, or enrich already-bloated pharmaceutical companies to the tune of $8 billion a year.

One person doesn’t seem very conflicted about favoring formula, though: Mitt Romney. As Massachusetts governor, he took steps friendly to Big Pharma that helped push pre-fab formulas on new moms. Romney’s pro-corporate, anti-mammary agenda could now have implications as he struggles to convince a key constituency of female voters that he’s got their interests at heart.

Romney’s role goes back to early 2006, when Massachusetts’ Public Health Council tried to ban so-called baby swag bags, totes full of free supplies that were given to new mothers as they left their delivery hospitals. Formula manufacturers had stuffed the bags with samples and coupons; the panel worried that the moms would see that as a hospital endorsement of less-healthy formulas and would influence the moms to miss out on the medical and financial benefits of breastfeeding.

“The marketing of infant formula undermines the initiative to nurse,” Phyllis Cudmore, a council member, told the Boston Globe. “I don’t think there’s any place in a hospital for corporate America trying to influence a vulnerable population.” A pediatric expert at Boston University’s medical school added: ”The commercial stuff like gift bags—it’s like Pepsi-Cola in the schools.” (Statistics show three-fourths of moms start out nursing their kids, but fewer than half are still breastfeeding after six months.)

Romney was having none of it, decrying the swag ban as “the heavy arm of government” squeezing dear ol’ ma. “I think that the mother should have the right to decide whether she is going to use infant formula or breast-feed,” he said in a press conference. “And allowing her to make that decision is best [done] by letting her have the formula, and if she wants to use it, fine.”

By May 2006, Romney had removed three anti-swag council members, including Cudmore, and added new ones who permanently reversed the ban. Shortly thereafter, in early June, Romney’s administration proudly announced that Massachusetts had beaten out three other states to get a $660 million facility for pharmaceutical giant Bristol-Myers Squibb—parent company to the manufacturer of Enfamil, one of the country’s biggest-selling infant formulas.

Peeved breastfeeding proponents started a website, banthebags.org, to press for Massachusetts to restore the Public Health Council’s ban. That in turn prompted the formula industry to start its own astroturf sites: momsfeedingfreedom.com and babyfeedingchoice.org. “The decision to breastfeed or bottle feed is personal, practical, and private,” momsfeedingfreedom.com states on a page decrying the bag-ban. “These ‘3 P’s’ are the reason that Moms Feeding Freedom was created!”

But the site doesn’t add who created it: It was registered in 2007 by a web marketer, ENilsson LLC, with “a grant from the International Formula Council.” That same year, ENilsson worked on Mitt Romney’s nascent presidential campaign. The firm’s founder, Erik Nillson, is now a major developer of GOP fundraising technology. And he’s continuing to support Romney’s election efforts.

Romney’s connections to the breastfeeding issue would seem to suggest that he is less about giving moms choices than about giving corporations greater revenue streams. “Distributing free formula in the hospital is not about empowering women, helping them make informed choices or providing them with needed resources in tough economic times—all arguments made by supporters of the free samples,” Elizabeth Mitchell Armstrong, a professor of sociology and public affairs at Princeton University, recently wrote in the New York Times. “Companies provide them for the same reason they distribute swag to celebrities: it drives sales.”

Indeed, between Romney’s recent missteps on women’s issues and his past maneuvering on breastfeeding, voting moms may decide that the GOP presidential hopeful has suckled at the corporate teat a little too long.