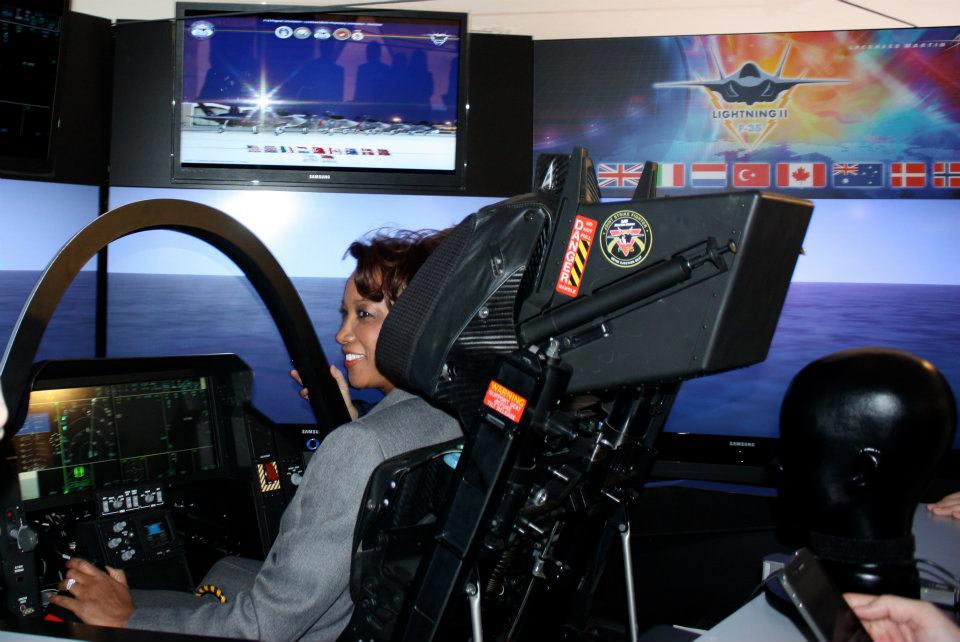 The F-35 fighter jet’s first missile floated wide. The second found its target, and an explosion brought the bogey down. “Yes! Got him! Woo!” exclaimed the pilot, Jennifer Carroll, a 52-year-old former Navy officer and airplane mechanic.

But it’s Carroll’s current job—lieutenant governor of Florida—that explains why her simulator flight was being closely watched by about two dozen members of the Florida League of Defense Contractors at an industry gathering in Tallahassee on a drizzly morning in mid-February.

Next, with a technician from Lockheed Martin furiously pointing at indicators and whispering commands over her shoulder, Carroll nosed the simulator down to take on a ground target. “Three, two, one…blam!” she exclaimed, to laughter. “Osama, you’re gone!” Virtual mission accomplished.

Carroll’s real aim at the gathering was to affirm that she and her boss, Gov. Rick Scott, stood ready to wage battle alongside the assembled business owners, lobbyists, and retired military types to guarantee that Florida’s economy will continue to benefit from a steady infusion of defense dollars; one study from 2010 pegged military spending in Florida at $30 billion.

Of course, almost all of that money ultimately comes from the federal government—the same federal government that tea partiers blast for unbridled spending and busted budgets. And while many in Washington agree with Secretary of Defense Leon Panetta that cutting “defense has to play a role in dealing with the national deficit,” it seems that Carroll and Scott, the Florida standard-bearers of the tea party’s debt-focused rage, are none too eager to see those cuts on their home front. Last year Scott, along with the leaders of the predominately Republican Legislature, created the Florida Defense Support Task Force to make the state even sunnier to defense contractors—and to keep those federal bucks flowing. Ensuring the continuation of the F-35 fighter project is one way to do that.

While Scott famously refused $2 billion in federal funds for high-speed rail in Florida, deriding it as an expensive boondoggle, his team shows no such hesitations about the $1.45 trillion F-35 project. The most expensive weapons system in Pentagon history, it has suffered technical setbacks, nearly a decade of production delays, and substantial cost overruns; the Pentagon currently estimates each plane will cost $135 million to build and maintain.

So it’s no surprise that the Simpson-Bowles commission pointed to halving the Navy and Air Forces’ orders and eliminating the Marines’ version as a deficit-reduction step; in 2009, the Congressional Budget Office floated a similar cut.

Any such reductions would lower the $1.59 billion in economic impact that, Lockheed boasts, Florida will get from F-35 contracts held by 95 in-state suppliers. They would also cut into the profits of Lockheed, whose charm offensive was on full display at the event. The leaders of the Florida state Senate and House had reserved virtual test flights. So had staffers for US congressmen and senators. At the simulator’s check in, information sheets with the headline “Protecting Florida’s Economy and our National Defense: The F-35 Program” were readily available.

Scott and Carroll aren’t the only state-level Republicans to criticize federal spending in general while boasting about the economic benefits of federal defense spending at home. During the Republican rebuttal to Obama’s 2012 State of the Union, Indiana Gov. Mitch Daniels ripped the president for trying to “build a middle class out of government jobs paid for with borrowed dollars.”

Yet just three months earlier, his deputy, Lt. Gov. Becky Skillman, blessed a report highlighting the stimulus brought to her state’s economy by nearly 40,000 deficit-exploding federal defense jobs. “Even though the national economy has struggled throughout the last decade, the state of Indiana has quietly established itself as an elite environment for defense-related companies to thrive,” Skillman boasted, adding that she had “come to appreciate…the importance of the defense industry to Indiana’s economy.”

However important that spending might be, the F-35 is not as significant to Indiana as it is to Florida. Lockheed tallies only 9 suppliers for the project in the Hoosier State, and estimates its 2012 economic impact at the comparatively modest $237 million.

But much more of the cost of the F-35 could end up jet-fueling Florida’s economy. J.R. McDonald, a former fighter pilot who is now a Lockheed Martin vice president, was on hand at the Tallahassee gathering to sing the jet’s praises, both tactical and economic. Florida’s bases were particularly well positioned to reap the planes’ benefits, he told me: “59 at Eglin, maybe 48 at Jacksonville. You’re gonna have more in Florida than anyplace in the world for the next decade.”

McDonald is a member of Florida’s new defense task force, and is known to be particularly close to the lieutenant governor. Shortly before taking the simulator’s controls, Carroll praised McDonald’s bosses at Lockheed for “creating such an outstanding aircraft”—and for being a “great partner…in helping to create jobs.”