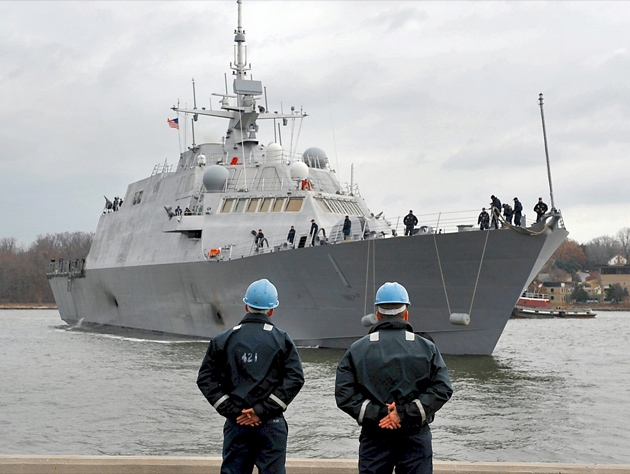 Note to future admirals and members of Congress: If you’re going to name a ship Freedom, you’d better make darn sure it’s seaworthy. According to an internal report, the US Navy’s latest greatest toy, the USS Freedom, poses a “high risk” to fail sea trials, can’t pass half the basic standards for a warship, and has been called a “no-go” by a senior inspector.

Proponents have long defended the Freedom, commissioned in 2008 as the first in a new class of 55 “Littoral Combat Ships” designed for missions close to shore. It’s supposed to be a cost-effective, flexible fleet. “As we continue serial production, we’re reducing costs and building these high-quality ships faster,” Joe North, VP of Freedom-builder Lockheed Martin, said this week. A 2010 Congressional Budget Office report (PDF) predicted the ships could cost as much as $626 million apiece—assuming everything went smoothly.

Everything is not going smoothly. “Freedom’s crew and contractors were not prepared for the inspection,” stated the Navy’s report, adding that the ship had failed 14 of 28 tests outright, including assessments of its fire-fighting systems, forward propulsion, communications, and electrical systems:

There was confusion between contractor and crew responsibilities for the performance of equipment checks. The inspection experience level for the majority of the crew is low although they did demonstrate a good positive attitude…the ship was clean. Several areas require preservation. Safety programs aboard the ship are non-existent.

Well, at least the ship was clean.

Navy officials point out that the May 7 report, known as a “Type Commander Material Inspection,” is an informal pre-test given to ships before they actually are assessed for war-worthiness. “The Navy routinely expects issues to arise from first-of-class ships. Repairs are made as required,”  Rear Adm. Tom Rowden said of the process Wednesday. “This also allows us to incorporate changes in follow on ships and we’re doing that.”

Still, this isn’t exactly new criticism for the littoral combat ship—a platform in search of a purpose that’s been a proven windfall for contractors. In fact, two different variants of the Freedom class are being built by rival contractors General Dynamics and Lockheed, the nation’s No. 1 defense contractor (and manager of the US’s other big boondoggle, the F-35 Joint Strike Fighter). An in-depth report this week by the trade magazine Aviation Week, complete with photos from a ship’s tour, found that USS Freedom was “plagued by extensive corrosion and manufacturing issues more recent and serious than anything the Pentagon or prime contractor Lockheed Martin has publicly acknowledged thus far.”

That came just weeks after the Project on Government Oversight published a trove of Navy documents showing how cracks and corrosion have turned the Freedom‘s hull into pricey Swiss cheese. “[B]ased on the new evidence we have uncovered, we recommend that the more expensive and severely flawed Lockheed variant be eliminated,” POGO executive director Danielle Bryan wrote.

Now Rep. Jackie Speier (D-Calif.), a member of the House Armed Services Committee, is calling for a GAO review of the Navy’s entire Freedom-class program. “It’s disturbing that the Navy would accept a ship that fails to meet the basic requirements for a tugboat,” she said in a statement Wednesday. “Taxpayers have already paid $7.6 billion for the development and procurement of the LCS-1 variant, and for their money they are getting a ship that is cracking and corroding. We can’t have sailors and taxpayers pay the costs of mismanagement.” The price of Freedom, it turns out, is higher than anyone expected.