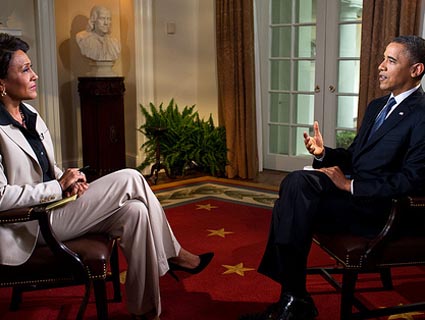 On Wednesday, President Barack Obama became the first sitting president to endorse marriage equality. But Obama’s personal belief that gays and lesbians should be allowed to marry was couched in the rhetoric of states’ rights—the president said the states should be allowed to decide the issue on their own. Obama’s position, as articulated yesterday, is perfectly consistent with allowing states like North Carolina to ban same-sex marriage.

Metro Weekly‘s Chris Geidner writes that the legal arguments the administration has been making with regards to the Defense of Marriage Act would effectively prevent the states from discriminating:

If the administration were still defending DOMA and had taken no position on the level of scrutiny to be applied to sexual orientation classifications, then Obama’s statement might mean that his view is that states have unfettered rights to legislate as they they wish on marriage. But, that is not the circumstances in which he makes these comments.

Instead, Obama’s position now is three-fold: (1) he personally supports same-sex marriage; (2) he believes as a policy matter that state, and not federal, law should define marriages, as it always has been in this country; and (3) he believes that there are federal constitutional limitations on those state decisions.

Geidner makes a persuasive case that Obama’s actual position on marriage equality is that states shouldn’t be allowed to discriminate against same-sex couples. But that’s not the position Obama articulated during Wednesday’s interview. Here’s the transcript from Obama’s interview with ABC’s Robin Roberts:

OBAMA: And what you’re seeing is, I think, states working through this issue– in fits and starts, all across the country. Different communities are arriving at different conclusions, at different times. And I think that’s a healthy process and a healthy debate. And I continue to believe that this is an issue that is gonna be worked out at the local level, because historically, this has not been a federal issue, what’s recognized as a marriage.

ROBERTS: Well, Mr. President, it’s– it’s not being worked out on the state level. We saw that Tuesday in North Carolina, the 30th state to announce its ban on gay marriage.

OBAMA: Well– well– well, what I’m saying is is that different states are coming to different conclusions. But this debate is taking place– at a local level. And I think the whole country is evolving and changing. And– you know, one of the things that I’d like to see is– that a conversation continue in a respectful way.

Saying that it’s “healthy” for communities to come to “different conclusions, at different times,” is an endorsement of marriage equality federalism, not the idea that same-sex marriage is a fundamental right for gays and lesbians. Offered the opportunity to comment on North Carolina’s same-sex marriage referendum, Obama dodged the question.

Geidner makes a good case that Obama’s real position on marriage equality is “I’m going to say it should be left up to the states while trying my best to make sure it isn’t left up to the states.” That should be comforting to anyone who supports marriage equality, but it’s certainly not what Obama said yesterday. There are obvious political reasons why Obama articulated his views the way he did—it allows him to support marriage equality while shielding himself from accusations that he is imposing his social views on other people. To Republicans, however, leaving same-sex marriage up to the states means allowing the states to ban it. They will notice the difference between what Obama’s saying and what he’s doing.