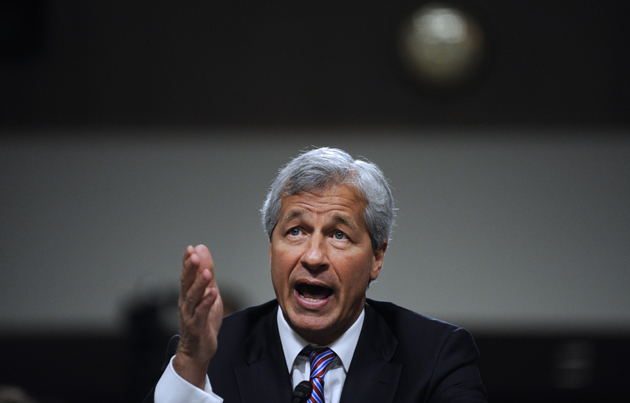 This morning, Jamie Dimon, the CEO of JPMorgan Chase, faced a Senate hearing over more than $2 billion in bank losses caused by risky hedges that blew up. Dimon said that the hedges—investments meant to protect the bank—had grown into “complex and hard-to manage risks.” The losses “let a lot of people down, and we are sorry for it.”

Many lawmakers are holding up the losses as evidence of the need for stronger financial regulation. The chairman of the Senate banking committee, Tim Johnson, (D-S.D.) in his opening remarks, asked for “a full accounting” of JPMorgan’s losses.

But through campaign contributions and well-connected staff, JPMorgan appears to have already taken its own accounting of the Banking committee. Here’s a picture of connections between the company and the committee:

One current staffer on the Senate banking committee, Dwight Fettig, is a former lobbyist for JPMorgan. In 2009, the bank hired him to work on “financial services regulatory reform.” Meanwhile, JPMorgan is stacked thick with former committee staff.

American Banker also reported that three other outside lobbyists currently working for JPMorgan were once affiliated with the committee:

A former senator on the committee, Mel Martinez (R-Fla.), is also now the JPMorgan exec in charge of Florida, Central America, and the Caribbean. Martinez was elected to the Senate in 2004 and went to the bank in 2010. Bloomberg reported that he was called to Washington after the losses were reported.

Lobbyists for JPMorgan appear to be keeping busy. The bank spent $7.6 million on lobbying last year, according to the Center for Responsive Politics.

JPMorgan has also been a generous donor to banking committee members, both Republican and Democratic.

It’s not clear what the committee will do beyond the hearings. Numerous federal agencies are investigating JPMorgan’s losses, including the Commodity Futures Trading Commission, the Office of the Comptroller of the Currency, the Department of Justice, and the Securities and Exchange Commission. Next Tuesday, Dimon will testify in front of the House Committee on Financial Services.