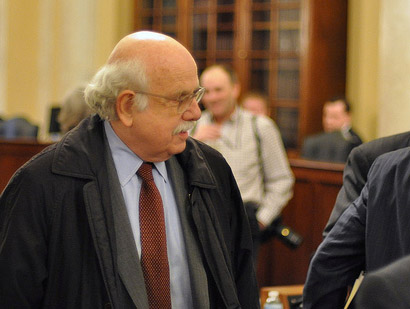 From his office just off Washington, DC’s posh Dupont Circle, Fred Wertheimer goes to battle each day against the rising deluge of shadowy campaign spending in American politics. The walls of his office tell the tale of a career spent in the political money trenches: A photo of Wertheimer in the White House signed by President Obama is inscribed “Keep fighting the good fight.” Says one framed news clip: “Ethics Watchdog Fred Wertheimer: When He Barks, Congress Listens.” A 1995 Wall Street Journal editorial dubs him “The Man Who Ruined Politics.” (Wertheimer is especially proud of that one.)

What few know is that Wertheimer’s long war on dark money began with a phone call—and a napping Wertheimer almost slept through it.

As I report in “Follow the Dark Money,” the cover story of Mother Jones’ July/August issue, Wertheimer was snoozing away one afternoon in May 1971 when the ethics group Common Cause called and offered him a junior lobbyist job. His portfolio would include urging lawmakers to write new restrictions on campaign fundraising and spending. This was the Nixon era, when secret donations flooded the system and millionaires could launch a candidate’s campaign with a single check. “Reform is not for the short-winded,” John Gardner, Common Cause’s founder, told him. Today, Wertheimer jokes, “He never told me it was 41 years and counting.”

The story traces four decades’ worth of scandals and secret cash drops, back-room deals and legislative battles, beginning with Watergate and arriving in the age of the super-PAC. Today, Wertheimer and his allies are on the ropes. Casino king Sheldon Adelson and the Koch brothers’ donor network are set to pump tens of millions of dollars into outside groups to elect their favorite candidates, shadowy nonprofits spend tens of millions more on attack ads, and Republican forces prepare to spend as much as $1 billion to topple President Obama and claim control of Congress.

What prompted an enraged congressman to call Werthheimer a “bald-headed bastard” for his efforts to reform campaign finance? And how did we get to a place where billionaires are now injecting massive amounts of untraceable funds into our elections? Go ahead and click here to follow the long and winding dark money trail.