Some startling stats about the election to decide the future of Wisconsin Gov. Scott Walker: 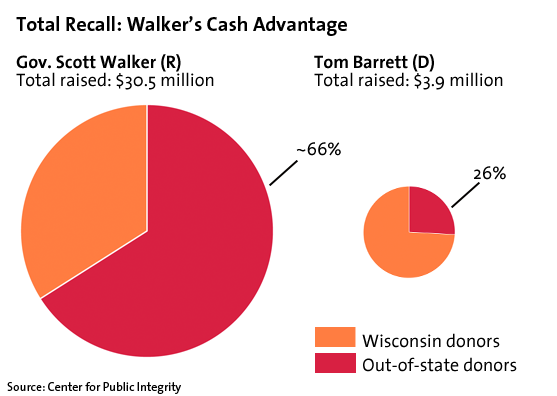 $63.5 million: The minimum amount spent by both sides in the recall

70 percent: How much more expensive the governor’s recall election is than the state’s second-most expensive race (the 2010 gubernatorial campaign)

$30.5 million: Amount raised by Walker to fight off the recall effort

$3.9 million: Amount raised by his challenger, Tom Barrett, the Democratic mayor of Milwaukee

About 2/3: Proportion of Walker’s donations that have come from donors outside Wisconsin

About 1/4: Proportion of Barrett’s donations that have come from donors outside Wisconsin

Some of the biggest contributions and expenditures in support of Walker:

• $510,000 to Walker from Diane Hendricks, Wisconsin’s richest businesswoman and a member of Charles and David Koch’s million-dollar donor club

• $260,000 to Walker from David Humphreys, a member of the Kochs’ million-dollar donor club

• $250,000 to Walker from former Amway CEO Dick DeVos of Michigan, a member of the Kochs’ million-dollar donor club

• $250,000 to Walker from Las Vegas casino magnate Sheldon Adelson, who with his wife has spent more than $25 million on the 2012 elections

• $100,000 to Walker from Wyoming investor Foster Friess, a member of the Kochs’ million-dollar donor club

• $100,000 to Walker from Dallas oil and gas billionaire Trevor Rees-Jones

• $6.5 million on ads spent by Americans for Prosperity, Wisconsin Manufacturers and Commerce, and the anti-labor Center for Union Facts

• $9 million on ads spent by the Republican Governors Association‘s Right Direction Wisconsin PAC; only about $7,000 was raised in-state since April 23. The RGA got $1 million from David Koch in February. It’s also received $500,000 from the US Chamber of Commerce

Some of the biggest contributions and expenditures in support of Barrett:

• $200,000 to the America Votes Action Fund, a Democratic super-PAC, from Fred Eychaner, a reclusive media mogul and Obama bundler from Chicago*

• $1 million to the We Are Wisconsin Political Fund, an independent expenditure group run by state AFL-CIO president Phil Neuenfeldt, from the National Education Association’s super-PAC

• $1.3 million to Greater Wisconsin, an independent expenditure shop, from We Are Wisconsin; $900,000 from the Democratic Governors Association; $500,000 from the American Federation of State, County and Municipal Employees

Correction: This post originally stated that Fred Eychaner donated directly to Tom Barrett, who was limited by law to maximum individual donations of $10,000.