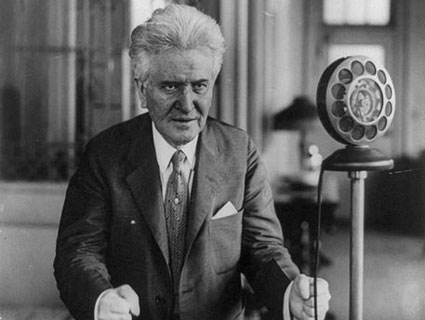 Wisconsin Sen. Robert La Follette, Sr. making a radio speech. He was a progressive, not a communist. There's a difference.<a href="http://en.wikipedia.org/wiki/File:Robert_La_Follette_Sr.jpg">Wikimedia Commons</a>

Rep. Tammy Baldwin (D) is running for Senate in Wisconsin, where she will probably end up facing former GOP Gov. Tommy Thompson. But Thompson faces a challenge from the right—Eric Hovde, a wealthy former CNBC talking head, who has apparently decided that the best way to win a Republican primary these days is to suggest the Democratic candidate is a communist. Here’s Hovde:

“I fundamentally disagree with Tammy on almost everything. She has a more liberal voting record than almost anybody in Congress,” he told The Hill in a recent interview. “Her philosophy has its roots in Marxism, communism, socialism, extreme liberalism—she calls it progressivism—versus mine, which is rooted in free-market conservatism.”

Needless to say Baldwin, who does not support government ownership of the means of production, is not a Marxist, a socialist, or a communist. And it’s especially sad to see a Republican candidate equating progressivism with communism in Wisconsin, a birthplace and longtime stronghold of the progressive movement. Robert La Follette, a leading progressive Republican, was Wisconsin’s governor from 1901 to 1906 and one of its senators from 1906 until 1925. LaFollette was succeeded in the Senate by his son, “Young Bob,” who served until 1946, when he lost a GOP primary to the infamous red-hunter Joseph McCarthy. Here’s a nice explanation of progressivism from the Wisconsin Historical Society:

Progressive Republicans… believed that the business of government was to serve the people. They sought to restrict the power of corporations when it interfered with the needs of individual citizens. The Progressive Movement appealed to citizens who wanted honest government and moderate economic reforms that would expand democracy and improve public morality… In Wisconsin, La Follette developed the techniques and ideas that made him a nationwide symbol of Progressive reform and made the state an emblem of progressive experimentation. The Wisconsin Idea, as it came to be called, was that efficient government required control of institutions by the voters rather than special interests, and that the involvement of specialists in law, economics, and social and natural sciences would produce the most effective government.

The state historical society’s site has lots more on progressivism and Wisconsin history, including many primary source documents. Perhaps Hovde should familiarize himself with it.