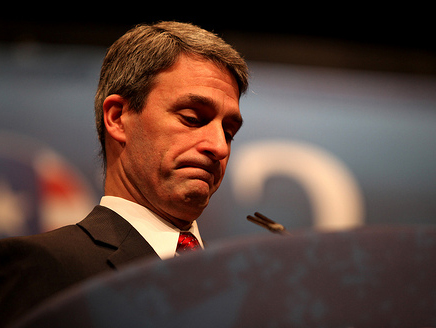 As we reported yesterday, Virginia’s GOP Attorney General Ken Cuccinelli has refused to certify new regulations that would allow existing abortion clinics in the state to stay open.

A regulation approved by the state Board of Health last month created strict new standards for offices providing abortion services, but said the new rules shouldn’t apply to existing facilities. Cuccinelli wants the rules to apply to all clinics, and is trying to overrule the Board of Health’s decision, throwing into question whether clinics in Virginia will be able to continue offering abortions. This has prompted protests in the state, including the organization of a new group: CoochWatch.

And yes, the double entendre is intentional. “Cooch” is both a nickname assigned to the crusading AG and slang for “That very special place on a woman that men spend their lives striving to visit over and over and over again,” according to Urban Dictionary (and that’s the nicest definition I could find there). “It’s just too perfect to pass up,” CoochWatch founder Stephanie Arnold told Mother Jones.

The group and other critics of the AG’s action staged a protest on Tuesday night outside Freeman High School in Richmond, Va., where Cuccinelli was speaking to meeting of the Tea Party Patriots.

Arnold, 25, is a medical student at Eastern Virginia Medical School in Norfolk and a former staffer at a Richmond abortion clinic. CoochWatch was formed to encourage people in the state to confront the AG about abortion access at every opportunity: “The Cooch has been keeping an eye on your vagina, so now we’re going to keep an eye on him.”