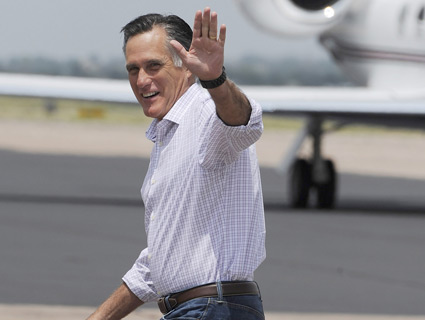 The ongoing hullabaloo over the timing of Mitt Romney’s exit from Bain has become a bit absurd. The Romney camp and Bain insist that Romney fully retired in February 1999 from the private equity firm he founded and owned—even though in the past he and Bain have described his departure as a part-time leave—and evidence has emerged (including Securities and Exchange documents I first reported) showing that Romney was involved to some extent in Bain as late as 2002, while he continued to maintain his ownership of the firm and its various entities. Romney has been working hard to avoid being held responsible for any post-February 1999 Bain deals that might have resulted in bankruptcies or outsourcing. But there is another reason for the Romney crew to worry about this controversy: Romney may have made a false statement on a federal financial disclosure form, and doing so is a felony punishable by up to one year of imprisonment and a $50,000 fine.

Like all presidential candidates, Romney has to submit a financial disclosure statement to the Office of Government Ethics. He filed his most recent one last month, and the disclosure contains a very clearly stated footnote:

There’s no ambiguity there: not involved in Bain operations in any way. But that’s not true.

As I reported, in November 1999, Romney signed a SEC filing that noted he was the “sole shareholder, Chairman, Chief Executive Officer and President” of several Bain entities that had acquired 22 percent of medical-waste firm Stericycle. The form also stated that Romney shared “voting and dispositive power with respect to” 2,116,588 shares of common stock in Stericycle “in his capacity as sole shareholder” of the Bain entities that were part of this $75 million investment.

To repeat: Romney signed a Bain document pursuant to a $75 million deal. That would appear to qualify as involvement in Bain activity. And according to a Bain spokeswoman, Romney signed such documents more than once. She told me that after February 1999 Romney was a “signatory on certain documents” until his separation agreement with Bain was finalized in 2002.

A Romney campaign official, asked if Romney’s disclosure statement was inaccurate, told Mother Jones, “signing technical documents as required by law doesn’t constitute an active role or involvement in the operations.” But on his federal disclosure statement, Romney declared no participation in “any way”—which presumably would cover signing documents that enabled deals to go forward.

Additionally, a Bain press release issued on July 19, 1999, described Romney as “currently on a part-time leave of absence”—not retired—and it quoted Romney speaking for Bain Capital regarding the departure of two of its managing directors.

Numerous other SEC filings submitted by Bain in the years following February 1999 list Romney as a Bain executive and a member of its “management committee.” (Josh Marshall at Talking Points Memo found two SEC filings from 2000 and 2001 listing Romney’s “principle occupation” as managing director of Bain.) And the Boston Globe made a splash this week when it reported that it had unearthed “nine SEC filings submitted by four different business entities after February 1999 that describe Romney as Bain Capital’s boss; some show him with managerial control over five Bain Capital entities that were formed in January 2002.” The Huffington Post, meanwhile, reported on testimony Mitt Romney gave in 2002 in which he acknowledged that after he headed to Salt Lake City he still participated in board meetings for firms in which Bain had invested. (In an interview on Friday, Romney said that in this time frame one of these firms, Staples, no longer was connected to Bain.)

Some fact-checkers and journalists have challenged the assertion that Romney continued to play a role in Bain after February 1999. Dan Primack, a senior editor at Fortune, obtained Bain documents from 2000 that don’t include Romney on the list of Bain’s managers or “key investment professionals” or as part of the day-to-day operations or investment committee. But the question here is not whether Romney was actively managing funds on a daily basis, but whether he did anything at all that was Bain-related.

Glenn Kessler, who writes the Washington Post‘s “Fact Checker” column, dismisses the SEC filings bearing Romney’s name, insisting, “much of the language saying Romney was ‘sole stockholder, chairman of the board, chief executive officer, and president’ was boilerplate that did not reveal whether he was actually managing Bain at the time.” Again, there is a difference between managing and participating in the firm’s operations.

Kessler notes that Romney signed that public disclosure form, under the penalty of perjury. Still, he doesn’t seem to believe this is a problem for Romney. He does concede, “The SEC documents, especially the ones Romney signed, do raise some questions. One can certainly argue that because Romney did not fully extricate himself from Bain till after his Olympic sojourn ended, he should bear some responsibility for what happened in that period.”

Kessler, though, slams the Obama campaign—three Pinocchios!—for saying that Romney and Bain may have violated the law by filing documents with the SEC that falsely represented Romney’s status at Bain. But even Kessler’s reading of the available evidence could land Romney in hot water regarding his financial disclosure form. While he contends the available evidence does not support the claim Romney actively managed Bain after February 1999, he does find that the signed SEC documents indicate that Romney, at the least, did not “fully extricate himself from Bain” until 2002.

That would suggest that Romney’s declaration on his disclosure form—no involvement “in any way”—is inaccurate. The Romney camp maintains that a few signatures here or there are no big deal. But Romney declared in a document submitted to the US government that he had nothing to do with Bain operations after February 1999. In light of that, those signatures are not nothing.