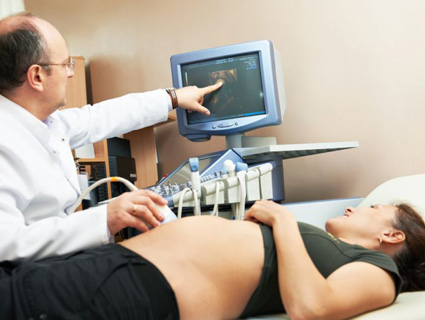 Virginia’s invasive new ultrasound law went into effect on Monday, meaning women in the state now have get a medically unnecessary procedure and wait 24 hours before they can get a (legal, constitutionally protected) abortion.

There was major hubbub earlier this year when Virginia lawmakers debated the bill requiring all women to get an ultrasound before having an abortion. The majority of the outrage, however, was directed at the fact that the original version of the bill would have required women in the earliest stages of pregnancy—less than 12 weeks post-conception—to have a sonogram probe shoved up their vaginas in order to achieve the desired effect of producing an image of the fetus.

People flipped out once the transvaginal ultrasound bit hit the news, and the Republican lawmakers pushing the bill had to make the state-sponsored penetration part optional. While women in the state can now opt for the jelly-on-the-belly type of ultrasound instead (even if it doesn’t produce the desired image), the new law is still burdensome, as my colleague Maya Dusenbery highlighted several months ago. Women aren’t allowed to refuse the ultrasound, it’s expensive, and the added procedure and waiting period both make it more difficult for women to follow through with the abortion. Moreover, abortion rights groups argue that the premise of the law—that women just need to see what’s in their uterus, and maybe they’ll rethink having an abortion—is condescending, at best.

There’s another problematic part of the law that Slate‘s Dahlia Lithwick pointed out back in February:

What’s more, a provision of the law that has received almost no media attention would ensure that a certification by the doctor that the patient either did or didn’t “avail herself of the opportunity” to view the ultrasound or listen to the fetal heartbeat will go into the woman’s medical record. Whether she wants it there or not. I guess they were all out of scarlet letters in Richmond.

Critics of the law continue to draw attention to its problems even as it goes into effect. “The government should have no role in a woman’s personal, private medical choices,” said Tarina Keene, executive director of NARAL Pro-Choice Virginia in a statement on Monday. “This is between her, her family and her doctor. Women deserve our support and respect, not the government’s will imposed upon them during a time of crisis.”