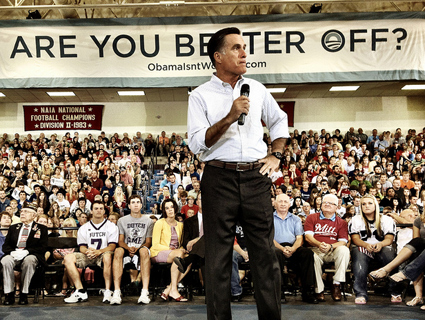 Mitt Romney has a very simple foreign policy vision: Don’t apologize for America. It’s right there on the cover of his book. That’s why, when the US Embassy in Cairo attempted to preempt an attack on its compound by condemning a virulently anti-Islam film, Romney was quick to not-apologize. Instead, he accused the Obama administration of sympathizing with the embassy attackers by speaking out against bigotry: “It’s disgraceful that the Obama administration’s first response was not to condemn attacks on our diplomatic missions, but to sympathize with those who waged the attacks.”

Here’s what he told ABC News in an interview on Friday, though, when asked about the film:

Well, I haven’t seen the film. I don’t intend to see it. I you know, I think it’s dispiriting sometimes to see some of the awful things people say. And the idea of using something that some people consider sacred and then parading that out a negative way is simply inappropriate and wrong. And I wish people would’t do it. Of course, we have a First Amendment. And under the First Amendment, people are allowed to do what they feel they want to do. They have the right to do that, but it’s not right to do things that are of the nature of what was done by, apparently this film.

Notice anything? It’s pretty much the exact same sentiment expressed by the US Embassy in Cairo—the one that prompted Romney to accuse the Obama administration of sympathizing with extremists: “The Embassy of the United States in Cairo condemns the continuing efforts by misguided individuals to hurt the religious feelings of Muslims–as we condemn efforts to offend believers of all religions.” Like Romney, the Embassy went on to explain (in a subsequent tweet) that an offensive low-budget film was no justification for attacks.

There’s nothing wrong with Romney’s condemnation of bigotry. The only mystery is why he ever thought there was.