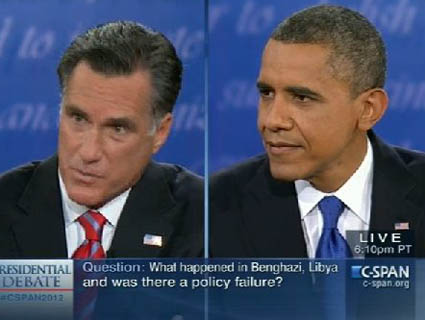 For a presidential election where the choices between two approaches to the economy, health care, and the role of the federal government couldn’t be wider, Monday night’s final presidential debate featured an unusual amount of agreement between the two candidates. This was in part because Mitt Romney, having taken positions to Obama’s right during the Republican primary and in the run up to the election’s final weeks, moderated his positions during the debate. It was a startling shift from Romney, who a month ago implied that the president sympathizes with people who kill Americans, and it undermined Romney’s argument that recent foreign policy challenges have been little more than the result of the Obama administration displaying “weakness.”

Down with Mubarak!
For all Romney’s criticism of Obama’s handling of the Arab Spring and its aftermath, he emphasized his agreement with the president in ultimately pushing former Egyptian president Hosni Mubarak to step down. “I believe, as the president indicated, and said at the time that I supported his—his action there,” Romney said. “I felt that—I wish we’d have had a better vision of the future.”

Let’s help the rebels in Syria—but no American boots on the ground.
The Washington Post‘s Max Fisher has a detailed rundown of how both candidates offered almost exactly the same approach to the ongoing civil war in Syria: Help organize the opposition, arm “responsible parties,” and try to turn the new Syria into a US ally—all without direct military intervention. Romney for his part, said he did not intend to invade Syria if elected, saying, “I don’t want to have our military involved in Syria.”

Sequestration is bad.
Romney and Obama both promised to prevent the forthcoming “fiscal cliff” scenario, in which large cuts in social and defense spending will be triggered in the absence of Congress reaching a deal on the debt. They both pledged not to allow the cuts, known as “sequestration,” to happen. “I will not cut our military budget by a trillion dollars, which is a combination of the budget cuts the president has, as well as the sequestration cuts,” Romney said. “That, in my view, is making—is making our future less certain and less secure.”  Though Romney wants to spend more on defense than Obama, pegging military spending to 4 percent of the overall economy, Obama similarly pledged not to allow sequestration to occur. “It will not happen,” Obama said.

Israel is our BFF.
Obama and Romney both took pains to emphasize their support for Israel, with Romney actually hitting Obama from the left for the absence of a peace deal between Israelis and Palestinians. Obama never once mentioned the occupation, even when prompted by Romney, but he did promise to back up Israel in the event of war with Iran. “I will stand with Israel if they are attacked,” Obama said. “I want to underscore the same point the president made which is that if I’m president of the United States, when I’m president of the United States, we will stand with Israel,” Romney said.

Diplomacy can work with Iran; force is a last resort.
Romney’s biggest departure from his prior stated positions on foreign policy was on Iran. At his foreign policy speech at the Virginia Military Institute, Romney said, “We must make clear to Iran through actions, not just words, that their nuclear pursuit will not be tolerated.” Obama hit Romney on this during the debate, saying that “I always understand that that is the last resort, not the first resort.” Romney responded by striking a less belligerent tone. “[O]f course, a military action is the last resort,” Romney said, praising Obama’s implementation of “crippling sanctions” against Iran and simply saying he’d “tighten them.” Both candidates pledged to prevent Iran from acquiring a nuclear weapon by any means necessary, including force.

It’s time to leave Afghanistan.
Romney has previously implied that he could leave troops in Afghanistan past 2014 if military advisers recommended he do so. In his VMI foreign policy speech, he promised to “evaluate conditions on the ground and weigh the best advice of our military commanders.” Last night, however, his tone was different, with Romney saying emphatically that “we’re going to be finished by 2014, and when I’m president, we’ll make sure we bring our troops out by the end of 2014.” In doing so, he affirmed what the Obama administration is already planning to do.

China has to “play by the rules.”
Obama and Romney, despite actually holding similar views on the inevitability of outsourcing (if not how to deal with it) both emphasized that China has to “play by the rules,” a platitude that projects toughness but doesn’t mean much. “[W]ith respect to China, China is both an adversary, but also a potential partner in the international community if it’s following the rules,” Obama said. “They have to understand we want to trade with them,” Romney agreed. “We like free enterprise, but you got to play by the rules.”

Let’s keep killing people with drones.
Moderator Bob Shieffer started the discussion on drones with a startlingly shallow question—simply asking the candidates’ positions on drones without contextualizing their use with the very public criticism of human rights advocates and intelligence experts that their use results in the deaths of innocents or leads to more people being radicalized. While Obama dodged the question (technically the targeted killing program is America’s worst-kept secret), Romney praised Obama’s use of drones. “We should use any and all means necessary to take out people who pose a threat to us and our friends around the world,” Romney said. “And it’s widely reported that drones are being used in drone strikes, and I support that entirely.” Romney did acknowledge that “we’re going to have to do more than just going after leaders and—and killing bad guys, important as that is.” What about the part where we’re not just killing “bad guys?”

It was a heated debate, mostly because the president kept knocking Romney for having shifted his positions over the course of the election. The president basically summarized Romney’s approach when he said, “You know, there have been times, Governor, frankly, during the course of this campaign, where it sounded like you thought that you’d do the same things we did, but you’d say them louder and somehow that—that would make a difference.” But despite Obama’s attacks, there’s an unusual degree of consensus on major issues—something that should probably give both sides pause.

Romney’s pitch Monday night was, in a nutshell: If you like Obama’s foreign policy, vote for me and you can have it. But you’ll also have a job. It’s a smart pitch, especially because Romney’s lackluster performance at the debate may be overshadowed at the polls by the sluggish recovery.