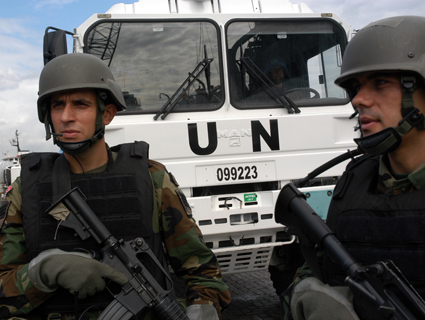 How it begins. <a href="http://www.shutterstock.com/cat.mhtml?lang=en&search_source=search_form&version=llv1&anyorall=all&safesearch=1&searchterm=united+nations&search_group=&orient=&search_cat=&searchtermx=&photographer_name=&people_gender=&people_age=&people_ethnicity=&people_number=&commercial_ok=&color=&show_color_wheel=1#id=109087778&src=2c1331df6b337f06dcb774fdc0b65d56-1-5">Homeros</a>/Shutterstock

Glenn Beck’s new novel, Agenda 21, is set in a dystopian future in which in the implementation of a United Nations treaty on sustainable development has turned the United States into a police state where workers spend their waking hours attempting to minimize carbon emissions and to have children with as many different partners as possible, as ordered by the central government. I should just end this post right there, really, but the rest of the book’s blurb is too good to pass up:

Woken up to the harsh reality of her life and her family’s future inside the Republic, Emmeline begins to search for the truth. Why are all citizens confined to ubiquitous concrete living spaces? Why are Compounds guarded by Gatekeepers who track all movements? Why are food, water and energy rationed so strictly? And, most important, why are babies taken from their mothers at birth? As Emmeline begins to understand the true objectives of Agenda 21 she realizes that she is up against far more than she ever thought. With the Authorities closing in, and nowhere to run, Emmeline embarks on an audacious plan to save her family and expose the Republic—but is she already too late?

It’s like The Giver, but for conservatives who think the end times are coming. (It’s nothing like The Giver.) Beck’s novel sounds absurd, but it actually taps into a very real concern on the far right, centering on Agenda 21, a non-binding United Nations declaration to promote sustainable development and global harmony that was introduced two decades ago and never ratified by the US Senate.

Some conservatives, including Rep. Michele Bachmann (R-Minn.), have long argued that the internationalist endorsement of sustainable development—that is, leaving a little bit of Earth for future generations when we can manage it—amounted to a dangerous step toward collectivism. As Bachmann put it, “They want Americans to move to the urban core, live in tenements, [and] take light rail to their government jobs.” This, in turn, has had serious policy consequences at the state and local levels, with activists fighting everything from public transit to zoning plans to manatee habitats under the auspices of taking on the blue helmets.

Obviously in the event of an actual invasion by United Nations manatees, you should disregard this post entirely and go buy Glenn Beck’s book.