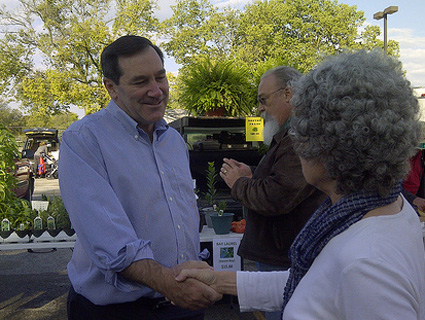 In the hotly contested Senate race in Indiana, Democrat Joe Donnelly pulled out a win over Republican Richard Mourdock.

Mourdock, who had the backing of tea partiers in the state, demolished longtime Sen. Richard Lugar in the Republican primary and was widely favored to win the general election. That is, until he stated in a debate in late October that if a woman becomes pregnant from rape it is “something that God intended to happen.” It was only one of many ill-advised rape comments this election year, but it came close to the election—and had an immediate, significant impact on Mourdock’s poll numbers.

Donnelly is a moderate Democrat who has served two terms in the House. His campaign aimed to win over moderates from both parties who had supported Lugar, a 35-year veteran of the Senate, by painting Mourdock as an “extreme” right-wing candidate. Mourdock certainly furthered that impression with his rape comment last month.

But the thing is, Donnelly also holds relatively extreme anti-abortion views. Last year he cosponsored and voted for the “No Taxpayer Funding for Abortion Act” that would have restricted federal funding for abortions even more than the Hyde Amendment already does. He also supported early versions of the bill that would have redefined rape as only “forcible rape”—which would exclude statutory rapes, cases where a woman is drugged or drunk, date rapes, or when the victim has limited mental capacity.

Given his own views on abortion, that Donnelly won the race largely because of Mourdock’s comment on the subject is pretty remarkable.