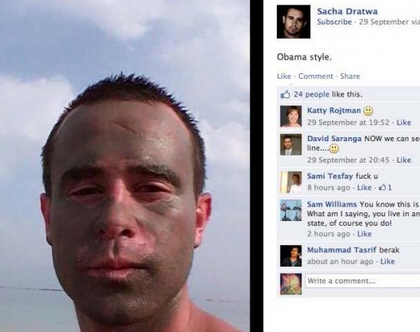 Following reports that he posted a photo of himself in what appears to be black face, with the caption “Obama style,” Sacha Dratwa, the 26-year-old lieutenant heading the Israel Defense Forces’ social media campaign is shutting down public access to his Facebook profile, according to a statement he sent Mother Jones and posted online.

A screenshot of the photo, which was originally posted by Dratwa on September 29, was published Saturday by the website, Your Black World. The image appears to be of Dratwa at the Dead Sea with mud on his face. While that would not be an uncommon activity there, the “Obama style” caption drew scornful comments on his Facebook page. Mother Jones asked Dratwa for a comment, and he said:

There have been attempts to make use of private photos from my Facebook profile in order to publicly misrepresent my opinions. Due to the amount of public attention I’ve garnered in recent days I have decided to restrict access to my page, in order to protect my privacy and prevent further cynical use of the information therein.  I am, and have always been, completely candid about my beliefs and have nothing to hide – as reflected by my Facebook profile, which until recently was open to everyone. The aforementioned photos do not reflect my beliefs and have no bearing whatsoever on my position in the IDF.

ABC News, which says it has confirmed the photo is real, reports that Dratwa responded to a user on Twitter accusing him of racism by saying, “I’m not a racist, please stop [spreading] lies about me.”

In charge of the Israel Defense Forces’ official Twitter account, @IDFSpokesperson, Dratwa became a high-profile figure during the recent Israel-Hamas conflict. According to a profile by Gizmodo, in his free time, Dratwa enjoys snowboarding, swimming, vodka, macchiatos, and hanging out with friends.

The IDF did not respond to a request for comment.