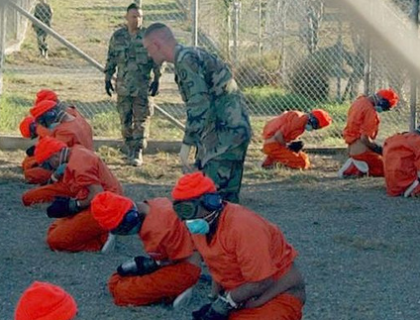 The memory of Barack Obama’s 2008 promise to close the detention facility at Guantanamo Bay now makes human rights activists roll their eyes. But last month, with comedian Jon Stewart as witness, the president repeated the same vow. Should Americans believe him?

Probably not, says Charles Stimson, a senior legal fellow at the Heritage Foundation who served as deputy assistant secretary of defense for detainee affairs under George W. Bush.

“I think that Obama’s comment was part political and part aspirational,” Stimson says. “He won’t spend any political capital in his second term trying to close the prison, unless unique circumstances appear.”

Robert Chesney, a law professor at the University of Texas-Austin who served on an Obama administration task force charged with evaluating detention policy, says that Obama’s intentions are genuine, but the GOP-controlled House and Democrat-led Senate pose too great an obstacle.

“I certainly don’t think it’s going to happen, because Congress is cabining him in,” he says. “This isn’t the policy he wants, but it’s the policy he’s stuck with.”

Obama’s failure to close Gitmo has been criticized by progressives and conservatives alike (remember Clint Eastwood and the chair?), but his failure is really his inability to overcome the bipartisan intransigence on the Hill. In 2009, Obama tried to move Guantanamo prisoners to the Thomson Correctional Center in Illinois before he was stonewalled by the House Armed Services Committee, which had a Democratic chairman at the time. Congress also passed a law that stopped the Obama administration from holding trials for Guantanamo prisoners in the United States by clamping down on the transfer of prisoners.

Not everyone thinks Obama’s latest Gitmo promise is empty. Ken Gude, chief of staff and vice president at the Center for American Progress, says that while “it’s very unlikely that we’ll see major changes in Congress’s outlook on closing Guantanamo in 2013,” he is optimistic that Obama will be able to overcome past obstacles and close the prison later in his second term.

Gude says that after the United States reaches several milestones signaling the end of the War on Terror—pulling the last troops out of Afghanistan and finishing the trial of Khalid Sheikh Mohammed and other 9/11 co-conspirators, for example—the American public might be more open to closing the prison.

“I think we’re going to have to ask ourselves in 2015-2016 if this is something we still want in 2050. And it’s going to seem ridiculous,” Gude says. “Hopefully the American public will see that moving prisoners to the US is a necessary step if we want to move on.”

Chesney isn’t confident the public will have a change of heart. “I think that would be very unlikely to happen in the foreseeable future,” he argues. “And it’s inconceivable that ending the war in Afghanistan would make [the American public] okay with moving prisoners to the US.”

Experts from both sides of the aisle do agree that when Obama talks about closing Guantanamo, he’s not talking about ending the practice of indefinitely detaining terrorist suspects without trial. Instead, he’s talking about what to do with the prisoners already in US custody, whose future is uncertain.

“Obama has embraced indefinite detention since 2009 and has never backed away from it,” says Karen Greenberg*, who is the director of the Center on National Security at Fordham Law, and is the author of The Least Worst Place: Guantanamo’s First 100 Days. “He’s never clearly made that break from George W. Bush.”

Stimson thinks the president doesn’t want to limit his options. “No president in his right mind is going to constrain his ability to detain somebody,” he says.

That means even if Obama does manage to close Guantanamo, the sticky issue of indefinite detention will remain, and civil liberties activists won’t be satisfied. “There’s no such thing as closing Guantanamo if you move the prisoners to Illinois or somewhere else on earth, and keep indefinite detention,” Greenberg says.

For the time being, major changes in how terrorism suspects are treated are most likely to come from the courts. Last month, a federal appeals court dealt a huge blow to military commissions when it overturned the 2008 military commission conviction of Salim Hamdan, Osama bin Laden’s former driver. That ruling suggests that future courts could throw out other charges against other Gitmo detainees. But no US court seems poised to strike down indefinite detention itself anytime soon.

Whatever Obama’s plan for shutting down Guantanamo, the detainees still apparently preferred Obama to Mitt Romney—at least according to a spokeswoman for the detention facility. None of the detainees cheered when Obama was announced as the winner the presidential election, but “the overall mood was of happiness,” Army Capt. Jennifer Palmeri, a Guantanamo detention center spokeswoman, told the Miami Herald‘s Carol Rosenberg last week.

Correction: An earlier version of this article mistakenly stated Karen Greenberg’s title. It has been corrected.