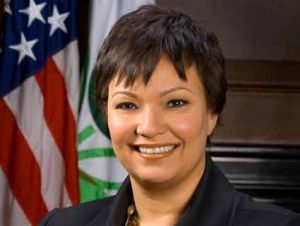 EPA chief Lisa Jackson has stepped down after four years on the job. The NY Times puts her resignation in the context of what many perceive as a lack of climate-change action on the part of the Obama administration:

Ms. Jackson’s departure comes as many in the environmental movement are questioning Mr. Obama’s commitment to dealing with climate change and other environmental problems. After his re-election, and a campaign in which global warming was barely mentioned by either candidate, Mr. Obama said that his first priority would be jobs and the economy and that he intended only to foster a “conversation” on climate change in the coming months.

I want to thank President Obama for the honor he bestowed on me and the confidence he placed in me four years ago this month when he announced my nomination as Administrator of the Environmental Protection Agency. At the time I spoke about the need to address climate change, but also said: “There is much more on the agenda: air pollution, toxic chemicals and children’s health issues, redevelopment and waste-site cleanup issues, and justice for the communities who bear disproportionate risk.” As the President said earlier this year when he addressed EPA’s employees, “You help make sure the air we breathe, the water we drink, the food we eat are safe. You help protect the environment not just for our children but their children. And you keep us moving toward energy independence…We have made historic progress on all these fronts.” So, I will leave the EPA confident the ship is sailing in the right direction, and ready in my own life for new challenges, time with my family and new opportunities to make a difference.