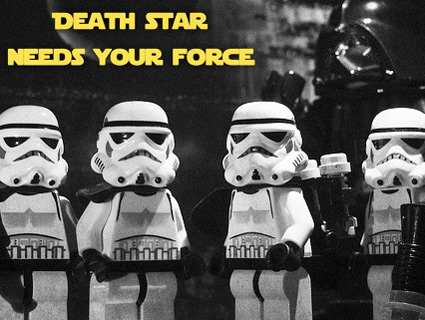 Last month, “John D” of Longmont, Colorado created a petition on the White House webpage “We the People” titled, “Secure resources and funding, and begin construction of a Death Star by 2016.”

The nature of the petition is fairly self-explanatory. Someone reportedly living in a city in Colorado wants Barack Obama to build a real-life version of the Death Star from Star Wars—the gargantuan spacestation officially named the DS-1 Orbital Battle Station, the construction of which Darth Vader himself oversaw:

As of Tuesday morning, the petition has upwards of 1,300 signatures (if a “We the People” petition reaches 25,000 signatures within 30 days, it merits an official response from the White House). It reads:

Those who sign here petition the United States government to secure funding and resources, and begin construction on a Death Star by 2016. By focusing our defense resources into a space-superiority platform and weapon system such as a Death Star, the government can spur job creation in the fields of construction, engineering, space exploration, and more, and strengthen our national defense.

The unfortunately fictional Death Star, the Galactic Empire‘s moon-sized base capable of obliterating whole planets with a single beam of energy, would be a substantial stimulus project indeed: Students at Lehigh University estimated that the steel alone (assuming the Death Star’s mass/volume ratio is roughly equal to that of an aircraft carrier) would cost $852 quadrillion—13,000 times the world economy’s GDP. My colleague/Star Wars buff Kevin Drum puts steel costs closer to 1.3 million times world GDP.

So, yes, such a massive, unprecedented project would almost certainly “spur job creation,” and the Obama administration’s development of a planet-destroying spacestation would likely guarantee an invincible national-security apparatus (save for certain circumstances).

Now, here’s a quick refresher on the “We the People” online-petitions page, which the Obama administration launched in 2011. Though it’s a kind enough if empty gesture and a nice idea (users have previously posted well-meaning petitions on subjects including AIDS prevention and humanitarian intervention in Syria), the webpage frequently unleashes spates of White House-sanctioned, taxpayer-funded trollmageddon.

Shortly after President Obama won reelection, dozens upon dozens of petitions came rolling in calling for the secession of individual states. (A backlash to these included several counter-petitions, like this one titled, “Deport Everyone That Signed A Petition To Withdraw Their State From The United States Of America,” and one titled, “Peacefully Grant the State of Herp-a-Derp to Withdraw from the United States of America and create its own NEW Government.”) Another recent petition requested that every elected Republican tea partier be removed from office and charged with treason. Last year, the White House was compelled to respond to two separate petitions demanding answers regarding an X-Files-style alien cover-up.

And while we’re at it, here’s one that I created on Monday night (under the pseudonym “Troll-Vixen”), asking Barack Obama to make Michael Bay’s movie The Rock the official motion picture of the United States of America, much in the same way “The Star-Spangled Banner” is our national anthem. The petition currently has three signatures: 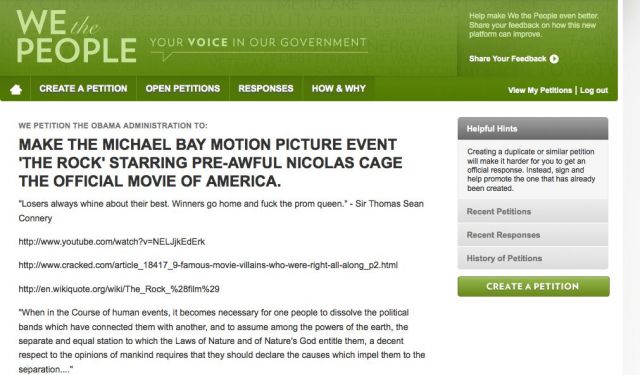 What? You have a better suggestion in mind?

So there you have it: As great an idea as the Death Star petition might be, it has about as much of a chance as making it onto Obama’s term-2 agenda as this does. But given that it has hundreds more signatures than mine does, it stands a slightly better chance of triggering an official response from the administration.