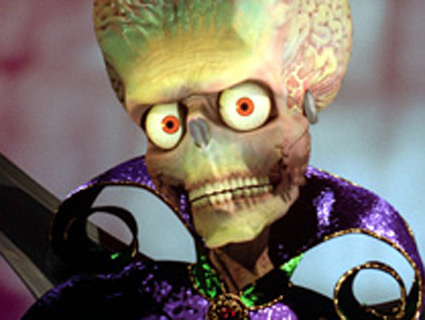 If Battleship or Invasion of the Pod People suddenly became our political reality, Barack Obama would beat Mitt Romney in a landslide in the 2012 presidential election.

Politico has the, uh, story:

The majority of Americans, nearly 65 percent, say Obama is better suited than Romney to handle an alien invasion, according to a new National Geographic Channel poll, USA Today reports.

Furthermore, separate internal polling of the Mother Jones DC office shows that American voters by a 2-1 margin believe that if Barack Obama had to deliver a rousing speech to fighter pilots on our shared humanity and the universal right to freedom from alien annihilation, it would look something like this:

Bad news for the Obama camp, though: The White House Office of Science & Technology Policy issued a statement last November that the US government has no proof that life exists beyond our planet and that a large-scale intergalactic war with Martians is not in fact imminent.