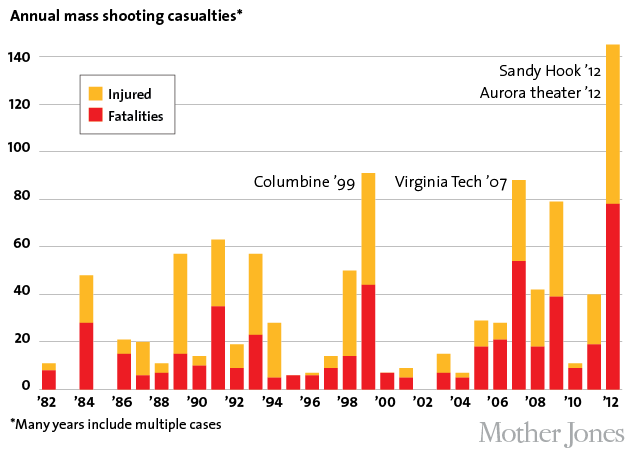 The gut-wrenching shock of the attack at Sandy Hook Elementary School on December 14 wasn’t just due to the 20 unthinkably young victims. It was also due to the realization that this specific, painfully familiar nightmare was unfolding yet again.

As the scope of the massacre in Newtown became clear, some news accounts suggested that mass shootings in the United States have not increased, based on a broad definition of them. But in fact 2012 has been unprecedented for a particular kind of horror that’s been on the rise in recent years, from Virginia Tech to Tucson to Aurora to Oak Creek to Newtown. There have been at least 62 such mass shootings in the last three decades, attacks in which the killer took the lives of four or more people (the FBI’s baseline for mass murder) in a public place—a school, a workplace, a mall, a religious building. Seven of them occurred in 2012 alone.

Along with three other similar though less lethal rampages—at a Portland shopping mall, a Milwaukee spa, and a Cleveland high school—2012 has been the worst year for these events in modern US history, with 151 victims injured and killed. More than a quarter of them were young children and teenagers.

The National Rifle Association and its allies would have us believe that the solution to this epidemic, itself but a sliver of America’s overall gun violence, is to put firearms in the hands of as many citizens as possible. “The only thing that stops a bad guy with a gun is a good guy with a gun,” declared the NRA’s Wayne LaPierre in a press conference a week after Newtown, the same day bells tolled at the National Cathedral and the devastated town mourned its 28 dead. (That day a gunman in Pennsylvania also murdered three people and wounded a state trooper shortly before LaPierre gave his remarks.) LaPierre explained that it was a travesty for a school principal to face evil unarmed, and he called for gun-wielding security officers to be deployed in every school in America.

As many commentators noted, it was particularly callous of the NRA to double down on its long-standing proposal to fight gun violence with more guns while parents in Newtown were burying their first graders. But more importantly, the NRA’s argument is bereft of supporting evidence. A closer look reveals that their case for arming Americans against mass shooters is nothing more than a cynical ideological talking point—one dressed up in appeals to heroism and the defense of constitutional freedom, and wholly reliant on misdirection and half truths. If only Sandy Hook’s principal had been packing heat, the argument goes, she could’ve stopped the mass killer. There’s just one little problem with this: Not a single one of the 62 mass shootings we studied in our investigation has been stopped this way—even as the nation has been flooded with millions of additional firearms and a barrage of recent laws has made it easier than ever for ordinary citizens to carry them in public places, including bars, parks, and schools.

Attempts by armed citizens to stop shooters are rare. At least two such attempts in recent years ended badly, with the would-be good guys gravely wounded or killed. Meanwhile, the five cases most commonly cited as instances of regular folks stopping massacres fall apart under scrutiny: Either they didn’t involve ordinary citizens taking action—those who intervened were actually cops, trained security officers, or military personnel—or the citizens took action after the shooting rampages appeared to have already ended. (Or in some cases, both.)

But those facts don’t matter to the gun rights die-hards, who never seem to run out of intellectually dishonest ammo. Most recently, they’ve pointed to the Portland shopping mall rampage earlier in December, in which an armed civilian reportedly drew his gun but thought twice about potentially hurting an innocent bystander and ducked for cover instead of firing. The assailant suddenly got scared of this retreating good guy with the gun, they claim, and promptly shot himself dead. Obviously.

Another favorite tactic is to blame so called “gun-free zones” for the carnage—as if a disturbed kid shoots up a school, or a disgruntled employee executes his coworkers, or a neo-Nazi guns down Sikhs at worship simply because he has identified the safest place to go open fire. All we need to do is make sure lots of citizens have guns in these locations, and voilà, problem solved!

For their part, law enforcement officials overwhelmingly hate the idea of armed civilians getting involved. As a senior FBI agent told me, it would make their jobs more difficult if they had to figure out which of the shooters at an active crime scene was the bad guy. And while they train rigorously for responding in confined and chaotic situations, the danger to innocent bystanders from ordinary civilians whipping out firearms is obvious. Exhibit A: the gun-wielding citizen who admitted to coming within a split second of shooting an innocent person as the Tucson massacre unfolded, after initially mistaking that person for the killer.

The NRA’s LaPierre was also eager to blame violent video games and movies for what happened in Newtown, and to demonize the “unknown number of genuine monsters” walking among us. Never mind that the failure to recognize and treat mental health problems is a crucial factor in this dark equation: Of the 62 mass shootings we examined, 36 of them were murder-suicides, while assailants in seven other cases died in police shootouts, widely considered to have been “suicide by cop.”

Those who are serious about contending with the problem of mass shootings understand that collecting and studying data is crucial. Since we began our investigation after the attack in Aurora in July, we’ve heard from numerous academic researchers, legislative aides, and others wanting access to our full data set. We’ve now published it here.

The question now isn’t whether most Americans will take seriously the idea of turning every grammar school in the nation into a citadel. (Here, too, the NRA’s argument falls apart; an armed sheriff’s deputy at Columbine and a robust security force at Virginia Tech didn’t stop those slaughters from occurring.) Now that we’ve just witnessed the worst year for mass shootings in memory, including 20 of the most innocent of lives snuffed out, what remains to be seen is whether real reform is finally on the way on Capitol Hill. Despite years of this kind of carnage, next to nothing has been changed in our legal system with respect to how easy it is for a disturbed young man to get his hands on a military-style assault rifle and a stockpile of ammunition.

Sen. Diane Feinstein has vowed to introduce a new ban on assault weapons when Congress reconvenes in January. President Obama has signaled that the gun issue will be a real priority going forward. But once the raw emotion of Newtown dissipates there will be the danger of slipping back into the same inertia and political stalemate so successfully cultivated by the pro-gun ideologues. Soon lawmakers will start eyeing their 2014 reelection campaigns and thinking about how much money the NRA has in its coffers to take aim at them with should they dare to dissent. This time, have we finally had enough?