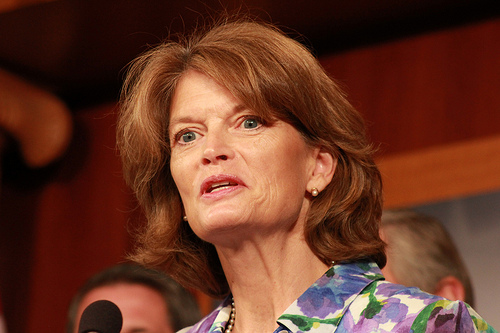 In July, Sen. Lisa Murkowski (R-Alaska) did something unexpected. Democrats and Republicans were taking turns on the Senate floor debating the DISCLOSE Act, a bill written by Democrats that would drag anonymous political donors into the daylight. Republicans stood in firm opposition to the bill, leaving it short of the necessary 60 votes and so condemning it to a swift death. The floor debate, then, was academic. When Murkowski took the floor, she nitpicked the version of the DISCLOSE Act before her, but broke with her GOP colleagues by hammering the secret money sloshing around our politics. She later voted no on the bill, but her pledge to battle dark money left Democrats with a shred of hope for future reform efforts.

On Friday, Murkowski joined Sen. Ron Wyden (D-Ore.) in offering for new plan to unmask secretive political groups and their dark-money donors. In a Washington Post op-ed, Murkowski and Wyden write, “At minimum, the American people deserve to know before they cast their ballots who is behind massive spending, who is funding people and organizations, and what their agendas are.” More than $400 million in dark money was spent during the 2012 elections, mostly by conservative organizations—a fourfold increase from 2008. Leading dark-money groups included Karl Rove’s Crossroads GPS, the US Chamber of Commerce, Americans for Prosperity, and Americans for Tax Reform, the anti-tax outfit run by Grover Norquist.

The Murkowski-Wyden plan—you can read a wonky outline of it here (PDF)—would try to force politically-active nonprofits, big business trade groups, labor unions, and shell corporations to reveal the true source of their funds. In spirit, it’s not all that different from the DISCLOSE Act of 2012.

Today, if a donor gives $10,000 or a $1 million to Rove’s Crossroads GPS, a nonprofit, to spend on political activities, that donor stays secret. Murkowski and Wyden’s plan would make Crossroads disclose that donor. To use a real example, a board member for the tea party-affiliated group FreedomWorks reportedly funneled more than $12 million in donations from him and his family through a pair of Tennessee corporations and then to FreedomWorks’ super-PAC. The donor’s identity was one of the biggest mysteries of the 2012 campaign, and it remained unsolved until the Washington Post reported on Tuesday—six weeks after Election Day—that FreedomWorks board member Richard Stephenson and his family were behind the big donations. Under Murkowski-Wyden, Stephenson’s name would have come out right away.

The two senators, in their outline for new disclosure legislation, try to anticipate the landmines on the road to 60 votes. They suggest raising the limit for donor disclosure from more than $200 to more than $500 to focus on larger donors. They also carve out an exemption so that dues-paying members of, say, the NRA or the Sierra Club who aren’t giving money for political activities aren’t disclosed like donors giving strictly to influence elections are.

Even then, the Murkowski-Wyden plan faces long odds. A leader of the anti-regulation movement when it comes to money in politics happens to be the top Republican in the Senate, Minority Leader Mitch McConnell (R-Ky.). McConnell claims such disclosure legislation is merely an attempt to intimidate donors, and he convinced his fellow Republicans to defeat similar legislation in 2010 and 2012. This latest plan may begin with bipartisan cred, a breakthrough of sorts for disclosure supporters, but the road to 60 votes means Republicans must break with McConnell—something no GOPer has been willing to do.