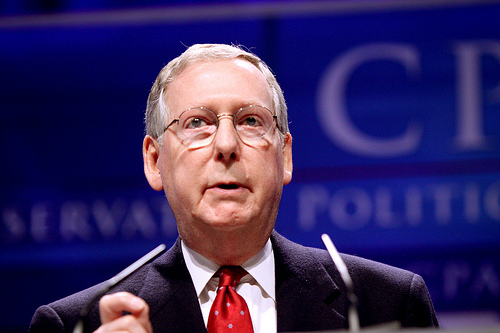 Today, Senate Republicans marched in lockstep with Minority Leader Mitch McConnell (R-Ky.) by filibustering the DISCLOSE Act for the second time in two days. Democrats needed 60 votes to proceed to an actual vote on the bill, which would require unions, corporations, and secretive nonprofits to disclose the big donors behind their political activities. The final vote was 53 to 45.

After the vote, Sen. Sheldon Whitehouse (D-R.I.), who introduced DISCLOSE this spring and later whittled it down to a simpler, 19-pageversion, dinged his GOP colleagues for supporting disclosure in the past and then blocking a full vote on his bill. (No Democrats joined the Republicans in voting against a full vote.) But Whitehouse said the fight to make dark-money groups more transparent wasn’t over. “Joshua didn’t get the walls of Jericho to fall the first time he and the Israelites walked around the city,” Whitehouse said in an interview Monday night.

Republicans offered a variety of reasons for blocking the DISCLOSE Act. Sen. McConnell claimed the bill created “the impressions of mischief where there is none,” and amounts to “nothing more than member and donor harassment and intimidation.” Sen. John McCain (R-Ariz.), a vigorous supporter of campaign finance reform in the past, said the bill favored labor unions—a claim flatly rejected by Whitehouse. “There is no union loophole in it,” he said. “It is the same rules for any organization no matter what.”

David Keating, president of the Center for Competitive Politics, which opposes more regulation of political money, said the bill overreached because it would also compel disclosure for nonpolitical ads. “There are plenty of ads that are lobbying related,” Keating told Politico. “You would have to go through all the red tape for those. It’s being billed as an election disclosure bill, but it covers way more than that.”

Pro-reform advocacy groups slammed the Republicans’ filibuster of the DISCLOSE Act. Fred Wertheimer, president of Democracy 21 and the dean of the pro-reform community, said in a statement, “In a disgraceful disregard for the interests of the American people, Republican senators have voted to protect secret, corrupting contributions made by millionaires, billionaires, and corporations to influence federal elections.” Others took the long view. “Taking back our democracy is a marathon, not a sprint,” said Adam Green, cofounder of the Progressive Change Campaign Committee, in a statement.

Even if it were to pass, the DISCLOSE Act would not take effect until January 2013. It’s unlikely to be introduced again before the November election.