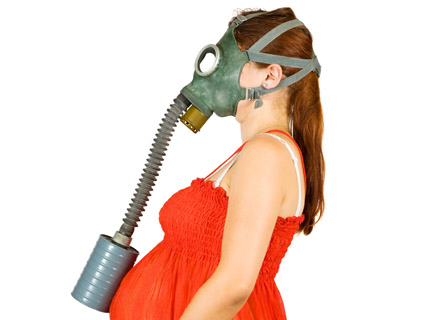 Women who are exposed to air pollution generated by cars, power plants, and heating and cooling systems are more likely to have a baby that is born underweight, according to new research published this week in the journal Environmental Health Perspectives.

Low birth weight—defined as anything below 5.5 pounds—is linked to negative outcomes for babies, including increased mortality, chronic health problems, and stunted mental and physical development. The study, which is billed as the largest survey to date, looked at birth weight data on 3 million births recorded at 14 sites in nine different countries (across North America, South America, Europe, Asia and Australia). Researchers analyzed ambient air quality data for the area during the woman’s pregnancy. They found that in the places places they studied, “the higher the pollution rate, the greater the rate of low birth weight.”

And, as one of the lead researchers noted in a statement, they saw effects even if there weren’t crazy high levels of air pollution. “What’s significant is that these are air pollution levels to which practically everyone in the world is commonly exposed,” said Tracey Woodruff, a professor of obstetrics and gynecology and reproductive sciences at the University of California in San Francisco. “These microscopic particles, which are smaller than the width of a human hair, are in the air that we all breathe.”