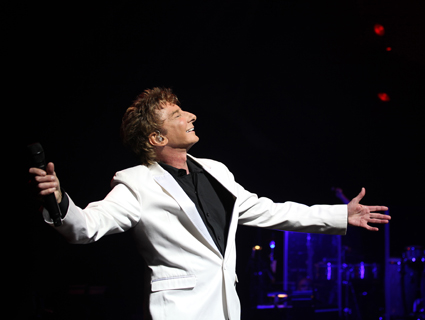 The only thing that can stop a bad guy with a gun is Barry Manilow with a microphone.face to face/ZumaPress.com

Back in September, in an effort to prove…we’re not exactly sure what, the National Rifle Association published a list of some several-hundred non-profits, celebrities, companies, and news organizations that “have lent monetary, grassroots or some other type of direct support to anti-gun organizations.” Daily Kos, which drew attention to the list Friday morning, calls it “nuts,” which is certainly one way of looking at it.

The NRA doesn’t offer any explanation of its selection process, or why they think it’s a compelling argument to call attention to the fact that the Civil Rights organization founded by Martin Luther King Jr. opposes what the NRA does. But maybe they’re on to something.

Here are 12 of the most terrifying people and groups on the NRA’s list:

Carrie Fisher. Daughter of a Jedi.

Mennonite Central Committee. You know who else had a central committee?

The Temptations. Deliver us from them.

Mary Lou Retton. Her medal may be gold, but her bullets are lead.

Tara Lipinski. Actually wears knives on the bottom of her shoes.

Southern Christian Leadership Conference. We don’t actually have a joke here. How can you put the SCLC on your enemies list?