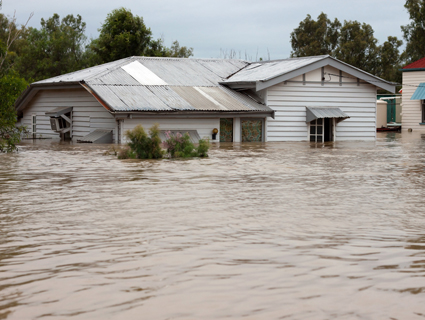 Despite record heat and extreme weather disasters in recent years, insurers aren’t adequately planning for climate change, according to a report issued Thursday. Only 13 percent of insurance companies have a “specific, comprehensive strategy” to deal with global warming.

Researchers at Ceres, a nonprofit that advocates for businesses to become more sustainable, looked at 184 responses from major insurance companies to a new National Association of Insurance Commissioners (NAIC) survey on climate risk. They found that only 23 of those companies—which include property and casualty, life, and health insurers—are really taking climate change seriously. Thirteen of those are foreign-owned companies.

Major insurers like Allstate and Travelers expressed “strong ambivalence about the state of the science” in their disclosures.

Out of a potential score of 50 points for climate readiness, insurers averaged a 7.3 overall. Property and casualty insurers—the ones that have to pay out when a monster storm wrecks your house, for example—were more on the ball, with eight actually describing concrete ways they are taking climate change into account in their business. But major insurers like Allstate and Travelers expressed “strong ambivalence about the state of the science” in their disclosures, Ceres found.

Ten percent of responders—many of them life and health insurers—argued that the survey was “not relevant” for their business. The report flags one response from health insurer Excellus that argues that “the Company is not aware of any conclusive data that there are health effects directly (or indirectly) related to climate change.” But, as we’ve reported here before, climate impacts like heat waves, the spread of vector-borne diseases, among others, pose what some in the medical community have dubbed the “biggest global health threat of the 21st century.” Only one health insurer, Kaiser Permanente, had a strong position on climate change.

The report’s authors found that 88 of the 184 companies said they see climate change as a “potential future loss driver,” rather than a current threat. They note, however, that these responses were collected in May 2012—well before Hurricane Sandy which, along with other extreme weather events, caused $58 billion in losses for the insurance industry last year.

This could be bad business for insurance companies, but it’s also bad for the rest of us that rely on insurance, Ceres argues. “The insurance sector is a key driver of our overall economy,” said Mindy Luber, president of Ceres. “Every segment of insurance industry faces climate risks, and yet the industry’s response has been uneven.” Luber argued that even just accounting for the risks would go a long way toward helping them address them. “What gets measured gets managed.”

Insurance regulators care too, because allowing the risks to go unmanaged could be expensive for policy holders. “Climate has the potential of being a game changer for the insurance industry and we want to make sure it stays on their radar,” said Mike Kreidler, the insurance commissioner for Washington State, which is one of three states mandating climate disclosures. “A lot of companies aren’t doing much yet.”