The months since the Newtown massacre have seen an explosion of gun and ammo giveaways on Facebook. For some gun enthusiasts, scoring a free AR-15 assault weapon has been as easy as clicking a “like” button on the Facebook page of a firearms marketer such as 556 Tactical, Pittsburgh Tactical, or AR15News.com. Since December, the number of gun and ammo giveaways on the social networking site has increased seven-fold, according to research by the media startup Vocativ: 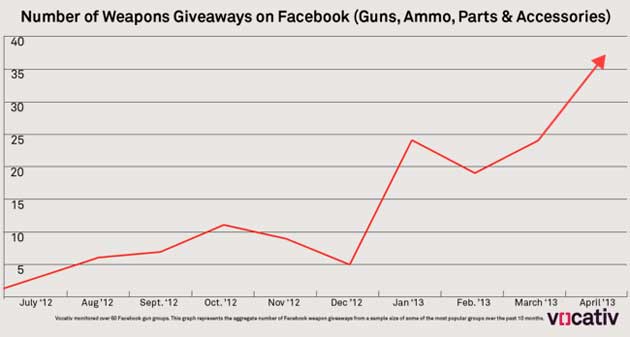 Facebook has allowed companies to give away guns as sweepstakes prizes since 2011. However, a Facebook spokesperson told Vocativ that the sweepstakes in question are technically ads, and therefore still violate a Facebook policy banning “the promotion and sale of weapons.” As of yesterday, the Facebook pages of the three major firearms marketers had been taken down, though Facebook apparently still allows assault weapons giveaways as long as they aren’t used as tools for selling guns.