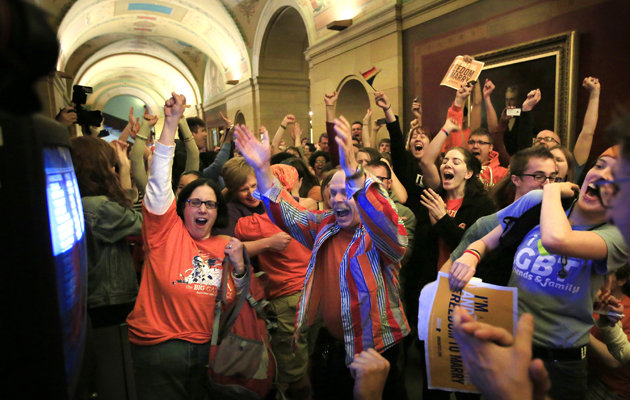 At 5 p.m. CST on Tuesday, Minnesota will become the 12th state to legalize same-sex marriage when Gov. Mark Dayton (D) signs into law legislation that just passed the state Senate on Monday. It’s a remarkable turn of events for a state where conservatives spent much of the last decade trying to pass a Constitutional amendment to put marriage equality out of reach. (A referendum narrowly failed last November.)

This is bad news for the politician who, perhaps more than anyone else in the state, has built her career on denying full rights to same-sex couples—Rep. Michele Bachmann (R-Minn.). Bachmann’s influence in her home state has been fading since her GOP presidential bid failed spectacularly in 2011. In a solidly conservative district, she squeaked past her Democratic challenger last fall by just 4,300 votes, and is now in the crosshairs of the Office of Congressional Ethics over charges that she improperly used campaign funds to promote her memoir. What political currency she has left may as well be in Bitcoin. Here’s how she responded to the vote on Monday:

I’m proud to have introduced the original traditional marriage amendment, and I thank all Minnesotans who have worked so hard on this issue.

No kidding. As I explained in a profile for the magazine two years ago, Bachmann opposed marriage equality with a religious fervor, viewing it as a struggle for the future of society. At one point she even enlisted divine intervention on a gay colleague, Sen. Scott Dibble:

In two consecutive legislative sessions, Bachmann introduced bills to place a gay marriage ban on the ballot. Openly gay Democratic state Sen. Scott Dibble says that when he wasn’t there she brought a group of conservative activists—”prayer warriors,” as she called them—into the chamber to pray over his desk. She held a candlelight vigil outside the Capitol to pray for the legislation’s passage and, with the Legislature scrambling to finish up its session in the spring of 2004, brought the body to a standstill through her efforts to bring the bill to the floor.

Dayton’s signature will mark the end of an era in Minnesota politics. On Monday, as the Senate at last voted for marriage equality, Dibble blew a kiss to his husband in the gallery. He may as well have been bidding Bachmann farewell. 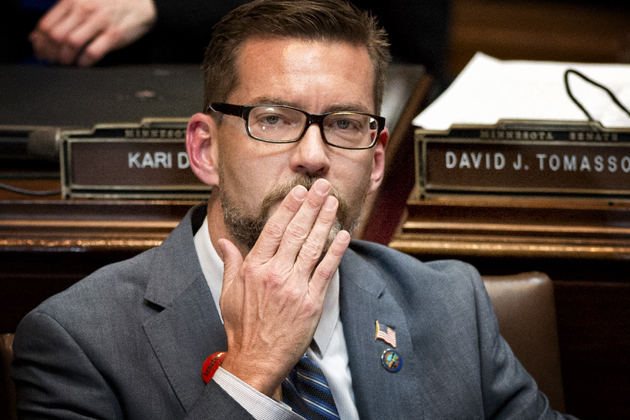