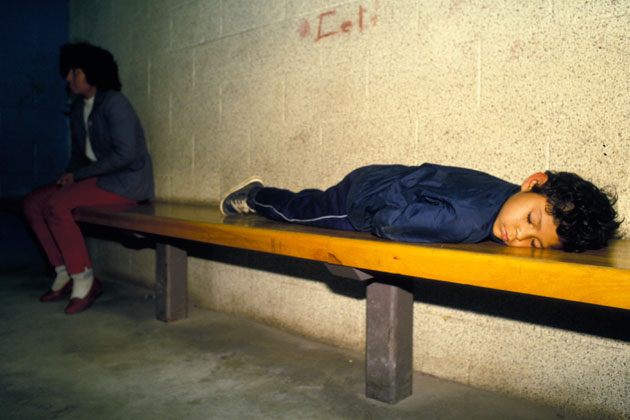 A young child and his mother wait in a US border detention center before being returned to their home country.Bill Gentile/Zuma

Over the past few years, record numbers of children, usually from Mexico or Central America and often traveling alone, have crossed illegally into the United States. From October 2011 to October 2012, some 31,000 juveniles (PDF) were apprehended by the Border Patrol. And according to a new report, more and more of them have landed in immigration detention centers—alongside adults.

Data obtained by the nonprofit National Immigrant Justice Center (NIJC) shows that the federal government detained at least 1,366 immigrant children for three or more days in 30 adult facilities between 2008 and 2012. The data, secured in a Freedom of Information Act lawsuit against the Department of Homeland Security and released Tuesday, also shows that nearly 1,000 were held longer than a week. Five children were detained more than a year, and one was held more than a decade, starting at around age 15.

And these numbers could be the tip of the iceberg: DHS provided the NIJC with data from only 30 of the 200 or so immigration detention centers currently in operation.

“The immigration detention enforcement system is broken,” says Mary Meg McCarthy, the NIJC’s executive director. “If there are 1,300 kids over a period of four years in adult detention facilities, there’s a real problem. Because that’s not what the law says. That’s not what’s supposed to be happening. As a country, we shouldn’t be detaining these kids, period, but especially not in adult facilities.”

Of the immigrant kids housed in adult detention centers, the vast majority of them were 17 years old at the time of detention—though 37 were younger than 15. 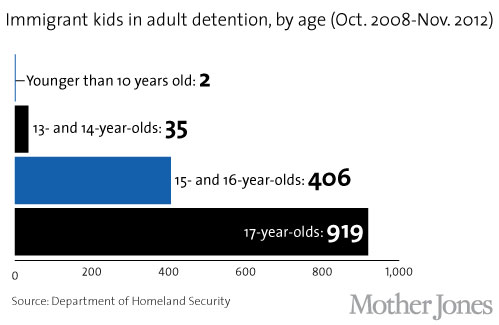 Not only does a 1997 federal settlement call for apprehended undocumented children to be held in the least restrictive setting appropriate to their age and needs, but it also explicitly mandates that “juveniles will not be detained with an unrelated adult for more than 24 hours.” According to DHS data, 19 immigrant children were held in adult facilities for more than 180 days. 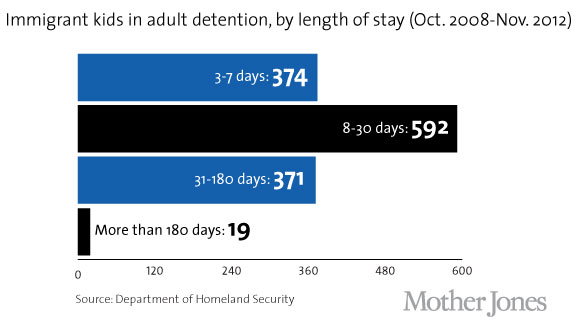 McCarthy says the NIJC wanted data from the facilities where it had clients, as well as large, geographically dispersed detention centers. As you can see in the chart below, the 10 adult facilities with the most detained children were all located in border states, with 8 of them in either Arizona or Texas. 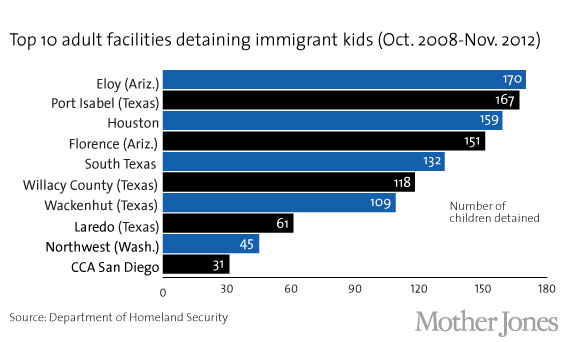 McCarthy, who says she’s encouraged by the recent headway on immigration reform in the Senate, notes that when undocumented immigrants are detained by DHS, they often don’t have access to legal counsel. “They become disappeared in the system,” she says. “But when you’re detaining more than 400,000 people a year in 200 jails, and you have all these different people involved in this mammoth system without any due process protections, it just lends itself to this type of problem. It just cries out for reform.”