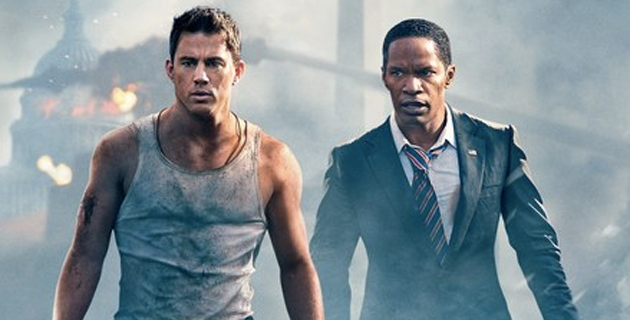 Anti-imperialist politics at its finest.Courtesy of Columbia Pictures

“Ever heard of the military-industrial complex???” President James Sawyer (played by Jamie Foxx) asks his gun-toting protector John Cale (Channing Tatum), as the two hide in a White House elevator shaft. President Sawyer is explaining to Cale why he believes armed right-wingers have invaded and occupied the White House and begun frightening tourists and shooting government officials.

The script, penned by James Vanderbilt, is one enormous pander to the most naïve impulses of your average dime-store liberal.

The film is directed by Roland Emmerich, whose sole purpose as a filmmaker is demolishing the White House, whenever he isn’t spreading scandalously awful lies about William Shakespeare. WHD is a mixed bag of B-movie pluses and minuses. There are moments when the dialogue is so laughably terrible and the bullet-riddled situations so wildly absurd that the scenes succeed on the merits of “so-bad-it’s-good.” But those moments are too often negated by tedious, sloppily choreographed action, and generic plot points designed to be taken way more seriously than they have any right to be. Emmerich’s unwillingness to commit to a delightfully trashy tone makes for an uneven action-comedy experience at best.

And the script, penned by James Vanderbilt, is one enormous pander to the most naïve impulses of your average dime-store liberal. The president’s agenda is defined by making peace with all the Arab, Muslim, and Persian world. After forging friendly relations with Iran’s new reformist leader, President Sawyer (most definitely a Democrat) announces in a legacy-defining speech the Sawyer Doctrine—which includes the withdrawal of every single American soldier stationed in the Middle East. He sets out to convince practically every country on the planet to sign a new peace treaty, and vows to take on the US’ out-of-control, conflict-hungry defense industry and its lapdogs in Congress.

War veteran and wannabe Secret Service agent Cale admires the president’s vision. But far-right gunmen who want to wage nuclear war against Iran do not, so they conquer the White House and start killing scores of innocents. Audiences might also notice that one of the deranged right-wing insurgents is a huge fan of a cable news network that’s clearly a stand-in for Fox News. As the henchmen round up the hostages, the American terrorist spots the network’s White House correspondent, played by an actor who physically resembles Fox’s Ed Henry. The terrorist proceeds to gush about how much he loves their Sawyer-bashing coverage, and how Ed-Henry-look-alike is basically the only truth-teller in the media.

Not to spoil the entire movie, but (spoiler alert) Jamie Foxx, Channing Tatum, and the liberals win the day, and the hawkish, Fox News-adoring, reactionary killers wind up either in jail or ripped to shreds by explosives and ammunition. It’s typical Hollywood liberalism with gigantic firearms.

Now here’s one of WHD‘s trailers, which makes the movie look far better—and much more dramatic—than it is:

White House Down gets a wide release on Friday, June 28. The film is rated PG-13 for prolonged sequences of action and violence including intense gunfire and explosions, some language and a brief sexual image. Click here for local showtimes and tickets.