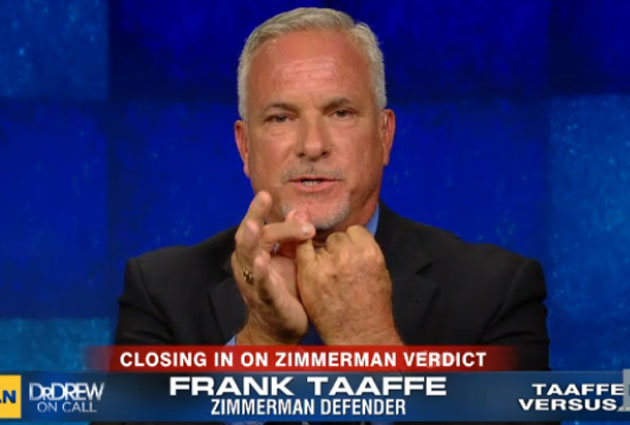 In April 2012, two days before George Zimmerman was arrested for the shooting death of 17-year-old Trayvon Martin, he huddled with a fellow neighborhood watch volunteer, Frank Taaffe. According to Taaffe, who disclosed the meeting on Fox News, Zimmerman asked him to share “several talking points” with the media. Taaffe obliged. Indeed, as Zimmerman’s legal drama unfolded over the next year and a half, Taaffe emerged as his most visible and outspoken defender. He gave hundreds of interviews to media outlets, ranging from the New York Times to Fox News to CNN, and made near-daily appearances on cable news shows during Zimmerman’s trial.

Taaffe used this platform to cast Martin as a drug-addled hoodlum and Zimmerman as a community-minded do-gooder (“the best neighbor you would want to have”) who had every reason to suspect the black teen was up to mischief. He also railed against Zimmerman’s critics, whom he accused of staging a witch hunt. “It’s really sad that he has already been convicted in the public media and has already been sentenced to the gas chamber,” he lamented in an interview with NBC’s Miami affiliate last year.

Taaffe was hardly the ideal person to be weighing in on a case suffused with racial angst—or commenting on criminal-justice matters, period. A Mother Jones investigation has found that the 56-year-old New York native has a lengthy criminal record that includes charges of domestic violence and burglary, and a history of airing virulently racist views. Just last Sunday, he appeared on The White Voice, a weekly podcast hosted by a man named Joe Adams, who has deep, long-standing ties to white-power groups and has authored a manual called Save The White People Handbook. (Sample quote: “A mutt makes a great pet and a mulatto makes a great slave.”)

During a previous White Voice appearance, on July 27, Taaffe argued that whites and blacks have no business mingling. (“They don’t want to be with us and we don’t want to be with them.”) Taaffe also opined that if Zimmerman had racially profiled Martin, he was justified in doing so because “young black males” had burglarized homes in their neighborhood. “What if I—a middle-aged white man—wore a hoodie and went through Trayvon Martin’s neighborhood?” he asked defiantly. Adams replied that “no sane white person” would dare walk down their “local Marcus Garvey Boulevard.”

“I’d only be there for one or two things,” Taaffe shot back. “And I’m sure the vice squad would want to be interested in that.”

“This trial is waking up white America, man,” Taaffe told The White Voice.

Later, Taaffe accused African Americans of committing “self-genocide” by failing to address the “ills and diseases that are festering” in the black community—especially the absence of black fathers, which “leaves young black males growing up without direction.” And he bemoaned the fact that some white women choose to date black men, saying that they invariably end up becoming single mothers. “Guess who winds up paying the tab on that? You and me and the rest of America,” Taaffe grumbled. “It’s called entitlement, man. It’s called food stamps. It’s called welfare.”

By the end of the show, Taaffe was so worked up that he was calling for a revolution. “This trial is waking up white America, man,” he said. “I’m fed up with the bullshit and the glad-handing to this one group of people who now control what we do and say. Come on, man, wake up America!”

Taaffe’s private Twitter feed (@pinsones) also reeks of racial animus. In one tweet, he bashed Michael Skolnik, who directs hip-hop mogul Russell Simmons’ political operations, saying “how much nigga cock do u suck an one day or maybe u like it pounded up ur hebe ass.” In another he wrote, “the only time a black life is validated is when a white person kills them.” 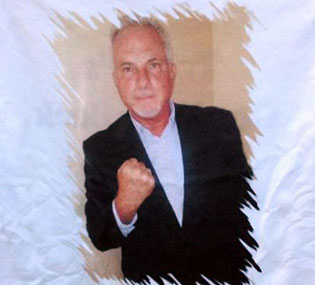 Asked about his history of racially charged remarks, Taaffe made no apologies. “There is a thing called First Amendment speech,” he said. “I have freedom to opine on current social issues, and I’m not going to be restricted.” He reeled off statistics about black crime and out-of-wedlock births. “I’m not going on some Tom Metzger-David Duke tangent,” he added. “I’m merely echoing the suppressed voices in this country that have been beleaguered by affirmative action and crimes committed by that particular group of people.”

These kinds of extreme racial views infused Taaffe’s media commentary. He told the New York Times that his gated community had been burglarized by “Trayvon-like dudes with their pants down” and taunted his black fellow talk show guests with race-tinged jibes. On a recent episode of HLN’s Dr. Drew on Call, the topic turned to racial profiling. Taaffe shouted down a fellow panelist and launched into a bizarre diatribe: “You know, Whitey, us…we’ve had a little bit of slavery, too,” he said. “Back in 1964 or 1965, then-President Johnson signed an executive order; it was called affirmative action. And you want to talk about slavery?” Taaffe’s fellow guests seemed stunned that he’d been given a national platform to broadcast these ideas. “It’s like every word that comes out of his mouth is a turd falling in my drink,” said African American radio personality Brian Copeland. “I don’t understand why he’s allowed to go on like he does.”

CNN and its sister network, HLN, have repeatedly invited Taaffe to weigh in on legal and technical aspects of the Zimmerman case, from the implications of witness testimony to the meaning of forensic evidence, such as the grass stains found on Martin’s pants. Taaffe sparred on-air with attorneys about the finer points of criminal law and tangled with forensic experts—including Lawrence Kobilinsky, the chair of the science department at John Jay College of Criminal Justice—over whether the small quantity of THC in Martin’s blood could have made him violent. (Taaffe insisted that it could; Kobilinsky called this argument a “red herring.”)

When Valerie Rao, Jacksonville, Florida’s chief medical examiner, testified during the trial that Zimmerman’s injuries were minor enough to be treated with Band-Aids—an assertion that cast doubt on Zimmerman’s claims that Martin had bashed his head repeatedly on the sidewalk—Taaffe appeared on the Nancy Grace show and argued that Rao was dead wrong. “George was experiencing trauma!” Taaffe insisted. “He was having many concussions with each blow to his head. And he was entering into a state of unconsciousness where he was seeing his life flash before him.”

After the prosecution released surveillance video from 7-Eleven showing Martin behaving normally as he shopped for Skittles and Arizona Ice Tea just before his death, Taaffe went on HLN’s Jane Velez-Mitchell show and muddied the water. Something could have happened in the intervening minutes to change Martin’s mood, he argued. “Also, they found a cigarette lighter and $40 on him,” Taaffe said, ominously. “He wasn’t employed. You know, who gave him the $40?”

Taaffe isn’t the first member of Zimmerman’s circle to be caught making racially charged statements. In March, Zimmerman’s brother, Robert Zimmerman Jr. (another outspoken defender), tweeted a photo of a black Georgia teenager who allegedly murdered a one-year-old boy with a gunshot to the face, alongside a picture of Trayvon Martin. Both teens were flipping off the camera. The caption read, “A picture speaks a thousand words. Any questions?”

Taaffe has been arrested or faced criminal charges nearly a dozen times and logged at least two convictions.

In Taaffe’s case, though, the comments about blacks’ supposed criminality are thick with irony. According to the Florida Department of Law Enforcement and the Orange County Clerk of Courts, Taaffe has been arrested or faced criminal charges nearly a dozen times and logged at least two convictions. Last year, Taaffe was taken into custody for driving under the influence. He pleaded no contest to a lesser charge of reckless driving related to alcohol use and received six months’ probation. He’s also been charged with battery and two cases of “repeat violence.” (Taaffe told Mother Jones that these were “frivolous” charges filed by “disgruntled” former coworkers.)

Many of the other entries on Taaffe’s rap sheet stem from domestic-violence complaints filed by his second wife and their son. In 2000, he was arrested for burglary—the very crime he alleges “young black males” were committing in his community—after allegedly swiping some papers from his ex-wife’s home. Taaffe pleaded no contest to a lesser charge of trespassing, and was sentenced to nine months in prison*. According to police reports, he was later charged with stalking and with child abuse after his son, William, jumped out of a moving car, allegedly to escape his father’s angry, profanity-laced tirade. Taaffe maintains these charges stemmed from false complaints filed by his then-wife, who persuaded William to corroborate the accusations so she could get more assets in their divorce. “She used my son as leverage against me for her own personal and monetary gain,” he told Mother Jones.

Taaffe—who has railed against absentee black fathers—was a marginal figure in the lives in his own children. Vincent, his eldest son from his first marriage, who died in a car crash last year, didn’t speak to him. (Taaffe says this was because Vincent was outraged over his involvement in the Zimmerman case: “I was ostracized by members of my own family for supporting George.”) William, who struggled with addiction and emotional problems after his parents’ brutal divorce, cycled in and out of rehab before dying of a drug overdose in 2008. According to a source close to the family who provided photocopies, he left behind an angst-filled notebook, with these words scrawled across the final pages: “Fuck you, Dad, I never thought a father could be so bad…I’m your son, the one you ditched.”

Now that the Zimmerman trial is over, Taaffe has no plans to abandon his crusade. He recently launched a website, where he intends to blog about issues including affirmative action and criminal justice. And he has teamed up with The White Voice to peddle “Taaffe’s Got Your Back!” T-shirts, which feature a photo of Taaffe snarling and brandishing his fist. (“All of the profits go to Frank,” The White Voice‘s website notes.) Taaffe told Mother Jones that he’s also “looking into” the case of Michael Dunn, the Jacksonville man who is accused of fatally shooting an unarmed black 17-year-old at a gas station after arguing with the teen over loud music. “My work is not done yet. I have a myriad of cases that people are calling me to help them on,” Taaffe said. “If we all took the time to stand up for people who we believe in our heart of hearts were innocent, this country would be a much greater place.”