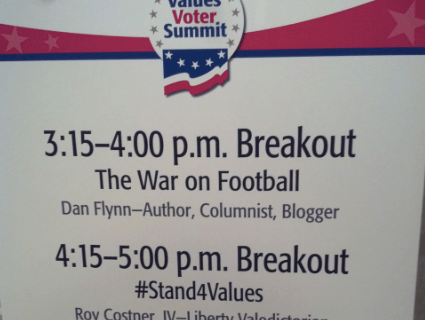 What did you do in the war on football, daddy?Tim Murphy

According to a guest speaker at this weekend’s Values Voters Summit in Washington, DC, the NFL’s concussion crisis is a myth cooked up by overzealous researchers and a willing media, the nation’s most popular sport is under attack from an increasingly soft population, and President Obama might have turned out differently—and smoked a lot less pot—if he’d found the structure and discipline of the gridiron growing up. Welcome to the newest front in the culture war: the War on Football.

Football is, as they say here in DC, having a bit of a moment right now. Last week, male college football analysts griped about the appointment of a woman, former Secretary of State Condoleezza Rice, to the sport’s first playoff committee. President Obama became the latest major figure to suggest that the Washington NFL franchise to change its name to something less racist. And on Tuesday, PBS aired a new report on the sport’s concussion crisis, touting research that connects football-related head trauma to long-term brain damage and early death. It was only a matter of time before football joined abortion, porn, and radical Islam as topics of discussion at the annual social conservative soiree.

“To me this put the BS in PBS,” says Dan Flynn, author of The War on Football and the lone speaker at Saturday’s eponymous breakout session. “You go 72 minutes into League of Denial before you get a voice critical of the overall thesis!”

Flynn’s central criticism isn’t that football is especially safe—it is predicated on full-speed collisions between really huge men, after all. It’s that the sport’s critics are ignoring the real science in favor of the more sensational varieties. He points to a 2012 study for the National Institute for Occupational Safety and Health that found that NFL players were statistically less likely to die early than men their age who did not play football. “What they found shocked the players’ association: NFL players actually live longer!” Flynn doesn’t mention until the end the second study NIOSH released a few months later, which found that NFL players had an significantly increased risk of neurodegenerative diseases, but when he does, he questions the agency’s motives for conducting it.

“Just wait a few years when OJ gets out of prison. He’s gonna say, ‘I found the real killers—it’s CTE!'”

Instead of being taken seriously, concussions are in danger of becoming a crutch for every stray misdeed. “Just wait a few years when OJ gets out of prison. He’s gonna say, ‘I found the real killers—it’s CTE!'” Flynn says, responding to suggestions that the disease might have some impact on violent behavior by retired players. “This is the ‘not-guilty by reason of football’ defense.”

(Flynn, who brags that he has experienced liberal intolerance first-hand in form of physical assaults “by aging hippies” and being “mooned and shouted at by book-burners,” generated a mini-controversy of his own in August, when he alleged that the Wall Street Journal has plagiarized a story he had submitted to an editor while attributing his work to another writer, neoconservative pundit Max Boot. The Journal denied the allegations.)

When it comes time for the Q&A, a college-age young woman brings the discussion back to President Obama, who is present in every breakout session at the Omni Shoreham Hotel, whether his name is mentioned or not. She wants to know what Flynn thinks about Obama’s confession to The New Republic in January that in light of the game’s health crisis, he’d think twice about letting son play football—if he had a son.

“He does,” interjects a white-haired woman in the third row. “The guy from Florida.” After the audience and Flynn share a good laugh at the expense of Trayvon Martin, Flynn gets to the point: Football is the perfect way to turn boys into men. Obama, he says, was a wayward teen, citing the “choom gang,” who could have benefited from the structure of the gridiron. (Intercepted!)

Afterward, I catch up with Flynn in the lobby. For all his talk about the sanctity of the sport, he never quite addressed the issue of who football was at war with—perhaps because it’s not as clear-cut as the venue seemed to suggest. “It’s not that football has grown especially hard, it’s that society has grown soft,” he says. This isn’t a partisan issue, he wants to make clear, notwithstanding his initial digs at liberal critics and  the man in the Oval Office. Softy conservative intellectuals like George Will are just as complicit as, say, softy lefty intellectuals like Malcolm Gladwell. And unless they let up—and football diehards fight back—the gridiron game will soon go the way of sideshow sports like boxing. The number he wants attendees to remember is 6 percent—that’s how much participation has dropped at the high school level over the last year alone, which Flynn attributes largely to the aforementioned fearmongering.

If the experts cited by Frontline were really onto something, he says, “society would look like Night of the Living Dead.”

During his presentation, after forgetting which year exactly the Saints had “brought New Orleans back as a city,” Flynn had made a joke at his own expense: “My memory’s not as good—I’ve got three concussions.” What about those three concussions (from a car accident and two fights)? Does Flynn, whose father had dementia after a long boxing career, ever have any concerns about his own future? Repeat head injuries do lead to an increased risk of neurological disorders, he concedes, but “it’s usually when you get up to a lot more than three.” A 2009 study in the journal Brain, however, found that “[t]he slight deficits resulting from one or two concussions were similar to problems found in patients with the early stages of dementia,” per the Los Angeles Times.

Flynn’s is the perfect criticism for a place like Values Voters—at once critical of scientific research, public media, and trial lawyers, with a few extraneous jabs thrown in at the man in the White House for good measure. Besides, everyone knows that liberals—who as at least one speaker at Values Voters pointed out from the main stage, support the apostasy of gender-neutral bathrooms—are total sissies.

But as it happened, Flynn wasn’t the only football guru at Values Voters. Later on Sunday, I stopped by a panel on religious liberty lawsuits featuring Craig James, a former Southern Methodist University running back and former Texas Senate candidate who lost his job at Fox Sports over comments he had made on the campaign trail about homosexuality. (James had said gays would face God’s punishment for their choices and criticized a Republican rival for once attending a gay-pride parade as mayor of Fort Worth.) The war on football extends to Fox itself.

When I ask him about Flynn’s thesis, though, James pauses for seven seconds and blinks a few times, not quite sure whether to unload. “Okay,” he says finally. “It’s an issue. It’s not about a policy or a thought—we have proven results that there are issues for athletes who suffer from concussions. And so we have to address it. It’s not a softening, it’s a wisening up!

“When I played, you took a couple of aspirin and went back in! They’re getting smarter—we have to. Somebody’s gonna get killed on that field!” This is the softening of America Flynn is at Values Voters to warn us about—but it’s coming from inside the building.