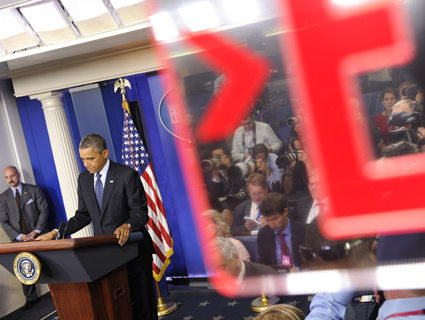 Republicans in the House of Representatives have had a consistent strategy during the government shutdown: Go small. In a rare display of unity from a fractured caucus, GOPers have passed a series of small bills that would fund agencies like the National Park Service and National Institutes of Health, while continuing to oppose any larger continuing resolution to fund the federal government. The idea was simple: Give Democrats the choice of either splitting ranks, or casting votes against popular (and emotionally resonant) programs.

But House Republicans have had company. Some two dozen Democrats have voted for all or most of the nine Republican continuing resolutions, joining their colleagues to support sequestration-level funding for the NIH, National Park Service, Federal Emergency Management Agency, District of Columbia, National Guard, veterans benefits, nutrition assistance, Food and Drug Administration, and Head Start.

Polis supports Democratic efforts for a clean continuing resolution, spokesman Brian Branton says, “[b]ut until that happens, he will work to make sure that our government is funded and our agencies reopen. Jared is proud to have supported a bipartisan bill that would reopen our National Parks so that the many jobs that revolve around tourism and Rocky Mountain National Park, in areas like Estes Park in Colorado, are safe.” Megan Jacobs, Foster’s spokeswoman, struck a similar note, emphasizing that while Foster opposed a piecemeal approach, “he believes if we have the opportunity to get some people back to work and services back on track, we should.” Garamendi, who voted for six mini-funding bills, released a statement on Thursday calling on Boehner to knock it off: “This is embarrassing for our country and makes our international partners nervous.”

If public opinion is any indication, though, things are looking up for the Democratic defectors. Public opinion polls have swung wildly against Republicans since the shutdown began. And on Thursday, there were signs of growing momentum for a bipartisan plan to restart the federal government, led by Sen. Susan Collins (R-Maine). Maybe House Democrats really can have it all.